Getting my last stitching & sewing in for a bit..... 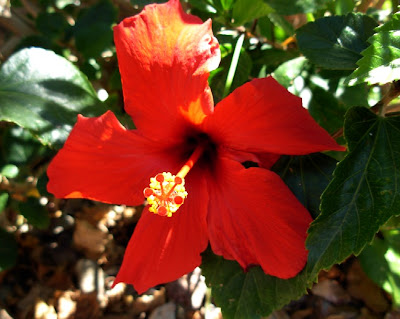 Tuesday I get my shoulder operated on so wanted to post what I've been doing lately. I won't be able to do too much for awhile depending on the extent of the surgery. I made this bag this week from a kit I picked up at a quilt show in January. The pattern is "Charm Party Tote" by Penny Sturgis. I just love it - the pattern was written so you could use the charm packs everyone is selling these days but of course you can cut your own squares just as well. It was fun to do - I did it all except the buttons last Saturday. I'm a big fan of pink and love the combination of colors and prints that were in the kit. It has a quilted lining and 2 nice inside pockets. For those of you still having a bit of winter, maybe the flowers will cheer you up a bit - we are having wonderful weather - today was breezy and about 80 I'm guessing. We're enjoying the last of "spring" as it starts to get hot sometime in May. 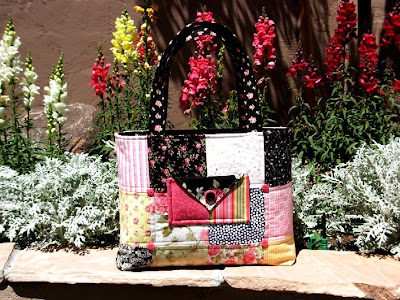 I also picked up a UFO the past 2 weeks to work on. This is "Sampler Gameboard" by The Drawn Thread.

I probably shouldn't say this....but.....this was my project from an RR a couple years ago - I only really had the bottom 2 rows of the gameboard to finish when it came back to me. HOWEVER........once I got it out to take a good look at it, I was dismayed about the quality of some of the stitching. Mind you, most of the piece is looking great, it was mostly one row that had a lot of problems and a few other spots here and there that needed a touch-up. I don't expect things to be perfect but I just could not leave in some of what I found - I'm talking knots, totally wonky stitches, missed threads, going over too many threads, I even found sections where the stitcher must have used the wrong color and then decided to just stitch over it in the correct color so there were 2 layers of stitching! Now I can see doing this for a random stitch or two but I'm talking about areas that were like 1" square. I plan to have this framed and just could not have lived with it like that. So I have been frogging like you wouldn't believe. The problem areas are very hard to take out because of all the problems - I just keep snipping and pulling and snipping and pulling....... I am down to the last square on the row I'm removing - it's actually not too bad and could probably stay in, but since I already removed the rest of the row I might as well be consistent. I will be re-stitching that whole row and I also already fixed up several other problems. I don't know....I've had some good RR's and some not so good. It seems like so many times there is some kind of issue with someone dropping out and not communicating, keeping people's projects, taking forever to do their parts (like 8 months for a few evenings of stitching!), doing poor quality work, etc. I have no problem if someone needs to drop out for personal reasons, everybody has things that happen in their lives that are unexpected. But just tell the group and mail the pieces back - that's all that is required. I have been in groups where we begged, begged, and begged some more to get pieces back. It's really frustrating. I just can't understand why anyone would treat a fellow stitcher or quilter that way. Anyway, at least I'm finally getting this done. I always did love this pattern and look forward to completing it and having it framed and hanging by the end of the year. The little blocks really go along pretty quickly.

I made a quick trip to the LNS this week to pick up the latest Loose Feathers pattern and a few others of course! I bought this nice scrap bag - I've had one for years but when I saw this one made out of the Moda sampler fabric and in a color I like, I just had to have it. 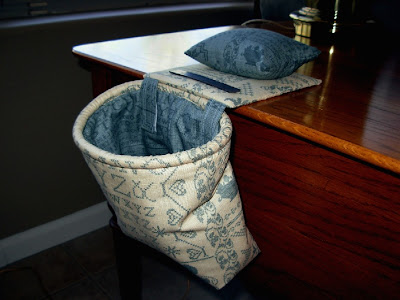 I also picked up a pattern from my wishlist called "Peaceful Garden" from The Stitching Parlor. I love the medieval look of this piece and especially the castle. I noticed after bringing it home that it uses 48 skeins of Crescent Colors over-dyed floss. Yikes!! I'll have to think about whether I want to invest that much in cotton floss or perhaps just convert to silks. However, the overdyes look really nice in the picture (of course!).

I'm happily anticipating the season premiere of "Deadliest Catch" on Discovery next week. That's the show about Alaskan crab fishing. To me it's amazing anyone can do that job - makes me less likely to whine about my own! I watch a lot of shows on Discovery and A&E. Now if '24' would just hurry up and come back on - can't believe we have to wait until January. I don't really watch very many TV shows so I really miss my favorites when they're not on.

Closing with a couple pictures of my 'kids' out playing in the yard today. Abby is the little one and Buster is the Sheltie. Thanks for stopping by my little world. :) 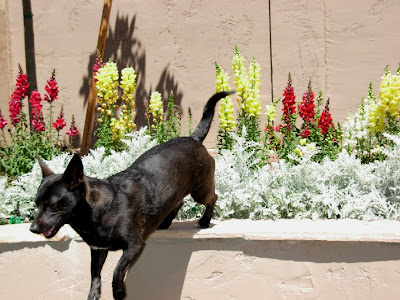 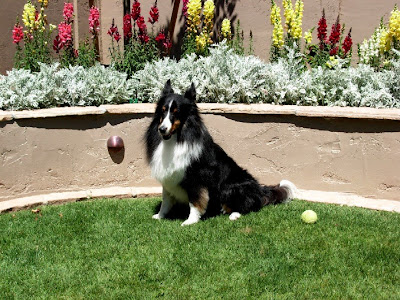 Well things are still chugging along here. I have been fighting a case of bronchitis for over a month which caused me to have to reschedule my shoulder surgery to the middle of April. I'm on my second round of antibiotics and finally starting to feel better.

On the good side, I finished up another quilting UFO. This is a scrappy strip quilt which I made for DH's car - he likes to keep one in the back which serves a multitude of purposes. It was fun to do and I like it. I have been trying to finish off at least one UFO per month and this was #3 so I'm on schedule so far. (That's the husband's feet peeking out at the bottom - I made him hold it up). 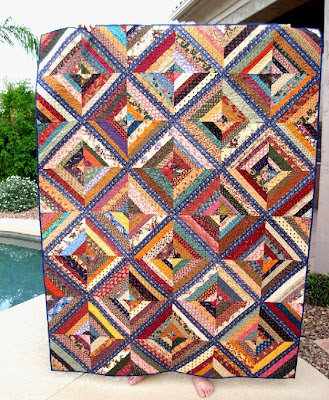 I also finished off the last of the Shepherd's Bush (2003!) monthlies, so I can wipe out 2 UFO's on my list. This week I picked up Brenda Keyes' "Plymouth Sampler" and did a bit of stitching on that but I haven't gotten very far.

The husband and I have busy doing some work on the yard. We had 3 ficus trees die off the winter before last because we had a bad frost here in the southwest where a lot of trees are not frost-tolerant. We had them taken out last fall and then built a raised area in our yard. We planted 3 new trees (frost tolerant ones!) and I have a place to plant flowers which is nice. Here is corner of the yard in 'before' state showing the dead trees, and now the 'after'.

It sure looks a lot better! We also are putting artifical "pet turf" in the area on the side of our house that are dogs use. We had real grass there first that wouldn't grow (not enough sun), then we tried 2 different kinds of rock. So this is our 4th incarnation of the area and I think the doggies will be very pleased to have something grass-like again. Supposedly this turf is pet-friendly, very durable and drains well. (Maybe your'e wondering why our dogs aren't using this nice patch of grass in the picture? Well that's in our backyard and our dogs can't go out there when we're not home because we have an unfenced pool. Even though they both swim great, we don't need the worry about an accident or having wet dogs tromping through the house all day!)

I decided I'm going to sound off on a few of my stitching pet peeves today. These are not huge issues in my life, just little annoyances. Maybe these bother some of you as well, or it could be that I'm the only one! I'm not going to name any names because this is not meant to bash anyone, I love stitching and the designers. I have no creative sense myself so I'm amazed at the things they come up with. But....sometimes I just get a little bit peeved......

Thanks for stopping by - can't believe more than a month has gone by since I blogged. I don't know how some of you have time to keep yours up so often!

Posted by Jeanne at 9:34 PM 8 comments:
Newer Posts Older Posts Home
Subscribe to: Posts (Atom)
Click here to email me. You must have a valid email address in your profile in order for me to respond.