I haven't felt much like blogging lately....I've been reading and commenting a bit here and there but I've got a lot of worries on my mind and when I'm in that kind of mood I just have a hard time being upbeat enough to post on my blog.  I don't want to bring everybody down nor share too many details about my personal life, so updates have been sparse for awhile.   However, I have been stitching at least.

This past week I focused on doing ornament finishing.  I'm still on target for completing at least one ornament a month, and in fact I'm one ahead as I currently have 7 done.  Yeah me!   I stitched these 2 LHN ornies in April & May but they weren't 'finished finished'.   I love how they turned out...the beaded edge takes longer to do but I sure like how it looks. Little House Needleworks - Merry Skater & Happy Skater
June's ornaments are below - 2 of the Blackbird Designs stockings. I'm stitching from their December stocking chart from the yearlong series - there is one more I want to do from that chart this year and I also have plans to do the little stocking with the Eiffel Tower on it from their Joyeaux Noel book.    I decided to do my finishing a bit different than the instructions - I sewed the stockings inside out like a pillow, then turned and stitched on twisted cording I made.  I'm finally getting better at attaching cording with the sewing method.  It's so much easier with 'hard' ornaments when you can glue it on but with soft-finished pieces I like to stitch it on instead of gluing. 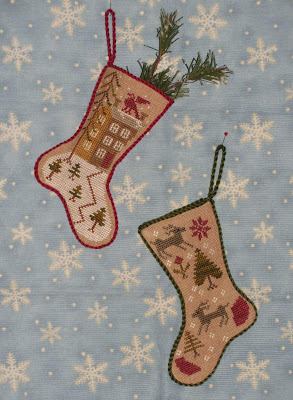 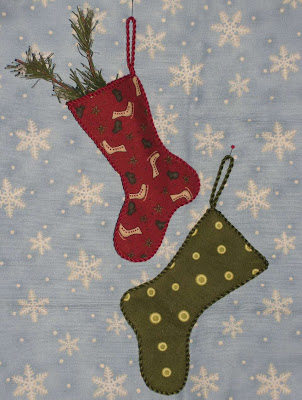 from Blackbird Designs 'Merry December' leaflet
So I'm all set to start on my July ornament.  I have such a stack of ornaments I'm wanting to stitch that it's hard to pick just one!   I've decided to work on "Woodland Babies" from Victoria Sampler.  I love these little tart-pan finishes!  I plan on doing all 3 of the these from the chart, plus there is a fourth matching ornament in last year's JCS ornament issue. 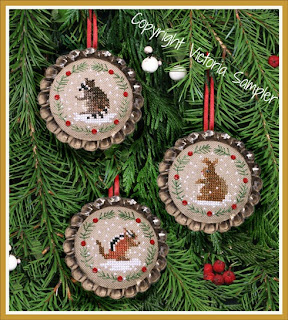 I  got a little annoyed kitting this up.   Victoria Sampler sells the tartlet pans in packs of 4 but I already found some at a local cooking store which was great.  VS also sells an Accessory Pack with threads enough to make the 3 ornaments, little beads for eyes, and the little red buttons. I thought the price on the pack was high ($24) and planned to use my own supplies.  I was annoyed that there is no DMC conversion listed on the pattern.  I have about half of the overdyed threads called for, but there are several where there is only 1 or 2 stitches done in that color so I would rather use DMC than buy more overdyed threads.  I found a conversion chart online at least.   I can't find the little beads for the eyes but I'll substitute some from Mill Hill.  The micro-mini red buttons are hard to find!  JoAnn's crafts sometimes has little multi-color packets of these tiny buttons but I needed at least 28 red ones plus I may want to make some of these ornies for gifts.   Finally by Googling I found a quilting site that sells little packs of the red ones so I've stocked up on those.  Hooray for Bunny Hill Quilts!  I think I am finally ready to start stitching now LOL.   I love the birdie ornaments series by Cathy Jean that VS is also selling, but again, in order to get all the cute buttons and things that go with them it runs into a fair amount of money to be spent.

As far as the ongoing WIPocolypse...I'm still plodding along on American Sampler.  I did finally finish the right-hand border by completing the rest of the flowers and the urn which was fun to do in bargello stitch.  I also made some progress working on the gardens around the house. (no those aren't giant green eggs...just trees without trunks yet...)  BUT...I have started the 'fill-in' around the top verse and I just hate working on that part! In the completed piece, the fabric surrounding the verses appears to be a different color of linen than the rest of the sampler, but that effect is achieved by weaving in a pale color of floss around the verse. (hopefully you can see the difference in the close-up photo below).  You have to go over 1 thread and under the next and so on and so on throughout the entire area.  Since I'm using 36-ct fabric it gets very tedious and even with my Daylight magnifier, it tires my eyes totally.  I'm only working on it during the daytime.  It's not too bad in the open areas where there are no words but around the words it is a royal pain!  You get lost and can't tell where you are or where you're supposed to place a stitch.  I'm making progress (slowly) but there is another verse to this sampler in the bottom border which will need the same treatment - OMG is all I can say! 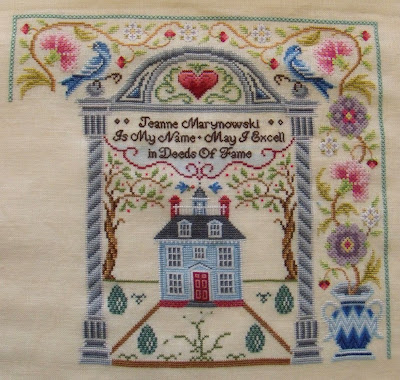 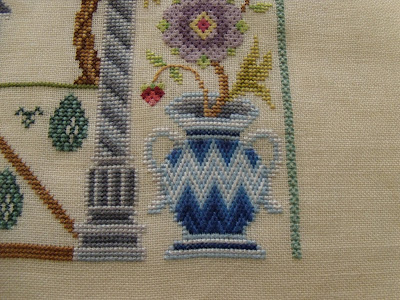 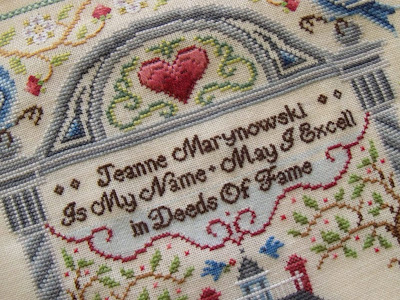 While visiting the Midwest with DH recently I was able to visit 2 stitching shops I've never been to before. Oh it was so much fun!!  (and DH didn't even mind hanging around while I oohed and ahhed over everything)  I visited Stitchville USA in the suburbs of Minnepolis, and Stitches & Stuff in Clinton Iowa - which is about 45 minutes from my hometown.   I spent a lot of money but my pile doesn't seem as high as you would think....amazing how quickly things add up!  I loved that they had a huge selection of linens at Stitchville....many colors I have not seen in person and in the count I like. It's always fun to see models you haven't seen before and get new ideas.  I highly recommend both of these shops if you ever get the chance to visit them!  We must have passed at least a dozen quilt shops on our roadtrip through 4 states but I only stopped at one...where I was able to pick up some of the Moda Blueberry Crumb Cake fabric line - I was coveting this last year when it came out so it was a happy find. Here's the stash items I brought back with me to Arizona......another Victoria Sampler holiday chart (Jingle Bell Tree Farm - gorgeous and WITH the accessory pack LOL), Maxim & Zoya from Plum St Samplers, some more BBD and Lizzie-Kate charts, Fancey Blackett from Pineberry Lane, another Word Play chart from With Thy Needle & Thread, lots of linens, a couple of kits (they had the cutest model made from a Dimensions kit - a winery - had to have it!), hand-dyed chenilles and rickracks, and a touch of quilting fabric to round it all out.   I've now decided to 'be good' the rest of the summer and try to work from my overloaded stash.......... 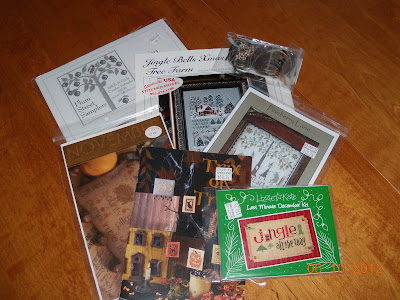 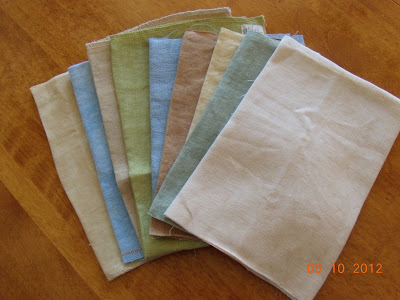 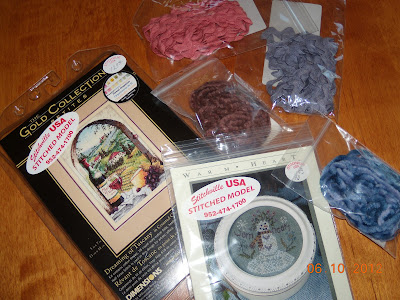 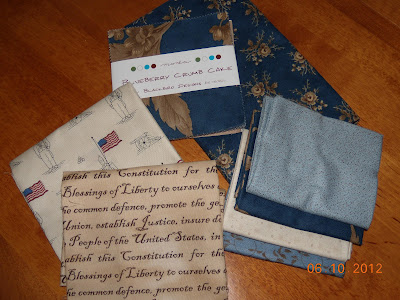 I hope you all are having a pleasant summer.  The heat in Arizona hasn't actually been too bad yet.....the pool is still at a good temperature to enjoy it (the water gets too warm later in the summer) and we're hoping for a minimal forest fire season this year.  The west has really suffered over the past 8-10 years with the drought and so many fires.
Welcome to all my friends and followers - so glad you took the time to stop by!!﻿
Posted by Jeanne at 2:06 PM 21 comments:
Newer Posts Older Posts Home
Subscribe to: Posts (Atom)
Click here to email me. You must have a valid email address in your profile in order for me to respond.