First a big thank you for all the encouraging comments on my Pride & Prejudice sampler!  It sure helps me get re-enthused about finishing this one up.    I'm finishing up a tree and starting on "Rosings Park" now.

I finally finished up my set of Christmas ornaments for July. I'm still on track with my monthly schedule.   I did all 4 of the little tartlet pan ornaments from Victoria Sampler. Even though those are small, it still seemed to take awhile with all the backstitching of pine boughs and the buttons & beads and mounting. I bought my tartlet pans from a local cooking store rather than ordering them from Victoria Sampler.  Mine were slightly smaller than the ones used in the chart so I stitched my ornies on 32-ct fabric instead of 28-ct so they would fit.  I liked these tartlet pans because they were thinner in depth...I punched a hole in the back with a nail and put my ribbon hanger in that way instead of gluing the ribbon on the back per the instructions. I think it looks better and I'm happy with the end product. 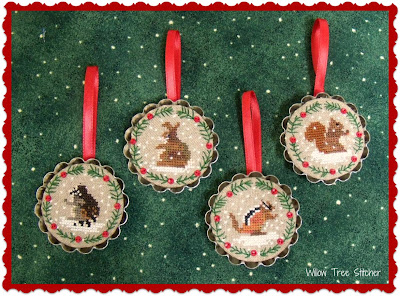 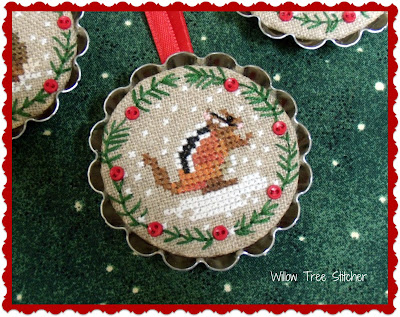 "Woodland Creatures" by Victoria Sampler
I got something fun in the mail this weekend - so much better than bills!  Mary Kathryn of eHandcrafts was selling off a few unframed stitched pieces of hers.   I saw this and it seemed like it needed to come home with me.  This is one of the Dear Diary charts (Elizabeth McGuire) from LHN, but Mary Kathryn altered it a bit to add the wording and make it a tribute to Little House on the Prairie.  What a cute idea!  I have this chart but wouldn't have thought of doing that myself. 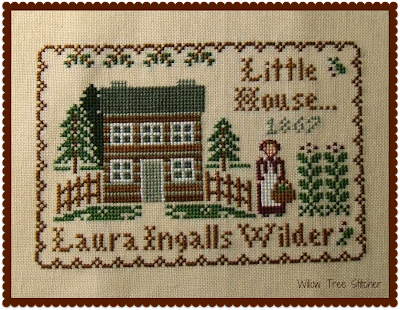 I'm not embarrassed to admit I have some boxed sets of the Little House DVD's either....Costco used to sell them for about $10 per season so it was a good deal. Sure there are some occasional silly episodes and like most series, it wasn't as good the last couple of years but so many of them are still enjoyable. It's fun to see who pops up as guest stars on that show from so long ago...Ernest Borgnine, Johnny Cash, and many others. I remember watching these reruns back in the late 70's....my roommate at the time and I would take bets on how far into the show Laura would cry- she was always crying about something LOL. (I defy anyone NOT to cry on the episode when Mary goes blind and the one with the big fire where her baby dies....sniff sniff...) I'll need to get this framed but will enjoy owning it. 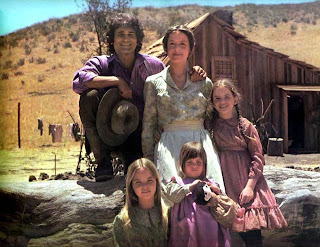 Are you enjoying the Olympics? Kudos to you Brits...what a wonderful opening ceremony!  I loved seeing the history of Great Britain vignettes and the fun film of the Queen & James Bond.   I picked out a couple small projects to work on while watching but I haven't gotten far enough to take any stitching photos yet.
This one is an oldie.......once upon a time SANQ magazine published 4 seasonal patterns by Ruth Ann Russell to fit inside the Olde Colonial clocks. I bought the clock several years ago and I see the date on the magazines is 2003!!  I had no idea they had been sitting this long waiting to be stitched!  I've kitted up the summer-themed clock sampler to start. 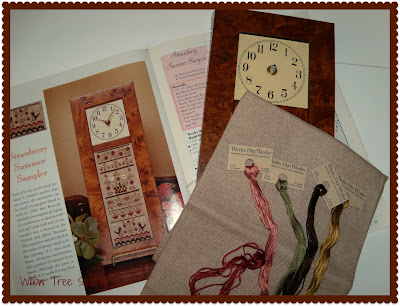 Summer Strawberry Sampler - Ruth Ann Russell of C Street Samplers
(from SANQ magazine Summer 2003)
I also got out this little kit from Shepherd's Bush for the "Glory" scissors fob. I substituted my own linen from the one in the kit...and I will make it into a little smalls pillow instead of a fob. I don't like  fobs this large on my scissors as I think they get in the way.  So silly I've let this sit for a couple years when it's so small. 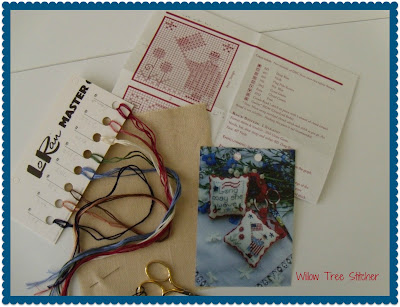 "Glory" fob kit from Shepherd's Bush
That's about it for today I guess.  Enjoy your week!﻿
Posted by Jeanne at 10:36 AM 19 comments:

July WIPocolypse...and the British are coming!

Seems like I just did a WIPocolypse post but I was pretty late with June's so they've sort of run together.

You ever get stalled on a big project?  I don't think I've touched my Pride & Prejudice sampler in about a year now.  I just got to where I had to do more planning and things weren't turning out as well as I'd hoped so I was avoiding working on it.  I was inspired to do this sampler when the "neighborhood" samplers were popular a couple years ago.  And as usual, I went a bit overboard because this sampler is pretty big..it's 18" x 16".   Without having charting software it's kind of tiresome to work out what goes where, converting patterns from DMC to silk, reversing patterns I needed to go a different direction, etc.   I had more motifs that I wanted to use than I can fit in, even as big as this piece is. If I had to do it over, I would maybe do it over-1 on 25-count or something like that, and pick a different linen.  But at the time, I was all enthused to start it and the LNS didn't have much in stock that was a big enough piece so I ended up with cream 36-ct Edinburough linen.

(P.S. I always get a few questions about this sampler...it's a composite of motifs pulled from lots of other patterns, I did not draw and design all of it myself.  I do have a separate tab on my blog that lists all the patterns I've used so far, I think all of them are still in print.)

Anyway...I got it out about 2 weeks ago and forced myself to get it going again.  I seem to have gotten past my mental roadblocks and I was able to make some good progress.  Woohoo!!  When last we visited this project, this is how it looked........... 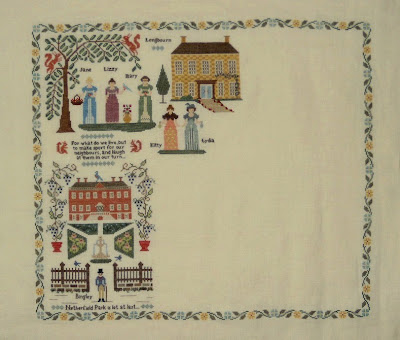 I've added a vignette of Lizzy & Darcy in the lower right corner.  I will be adding a tree next to them soon I hope. 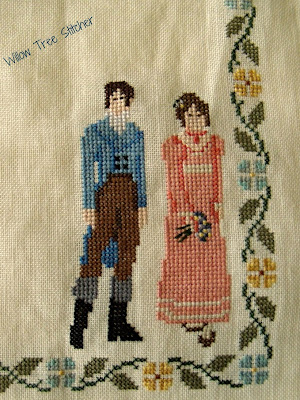 Then I added the military regiment in the upper right corner of the sampler.  Remember all the women were swooning over the handsome soldiers and of course we must have the infamous Mr. Wickham you know!   I was so thrilled when I found this pattern came out a couple of years ago  - it was perfect timing for me.  It's by Brenda Keyes' The Sampler Company  - it's called the "Over the Hills" sampler.  Before I found it I was trying to figure out how I could chart some soldiers and believe me I hate charting anything - I can't draw and find it extremely tedious.   Don't my British soldiers look great marching with the flag bearer and his Union Jack?   Sometimes, a plan does come together! (oops I just realized I forgot to finish the 2 little trees next to the tents...just the stumps are showing LOL) 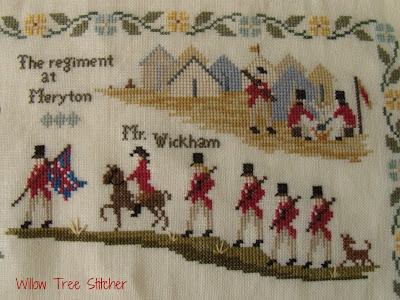 And now here is a snap of the total sampler...you can see there's still a lot of blank space where I have to fit in Pemberley and Rosings Park and a few things, but I'll get there eventually. 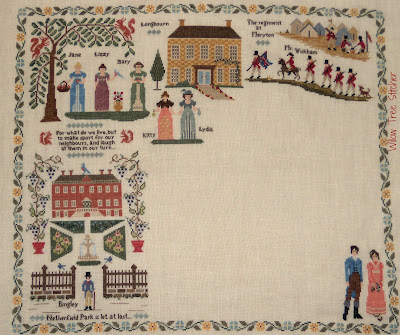 Now I've decided to start a new project...a couple of Christmas stockings for my dogs.  They've had some cheap ones we bought of course but I always intended to stitch stockings for them that would match the ones I did for my husband and myself.  These are the old ones from the Cross Stitch & Country Crafts magazines..I still think they are lovely patterns even though published so long ago. 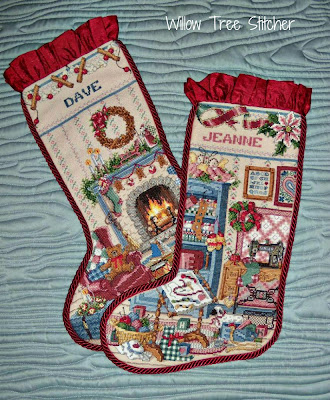 In my opinion, the designer never got the credit she deserves as the magazine never published her name. I'm pretty sure these were designed by Donna Kooler.   I know if I decided to stitch complete versions for the dogs that it would take forever and the poor dogs are already 8 years old so I better hurry up!  I'm going to stitch the abbreviated patterns where you stitch a nice cuff and just do a wallpaper pattern on the rest of the stockings.  I should be able to get these done easily by Christmas and I bought enough of the finishing materials that I can make them match the other 2 stockings. 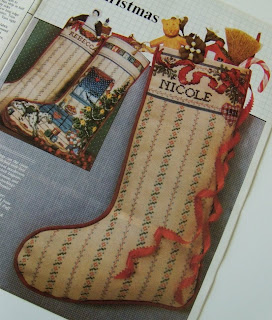 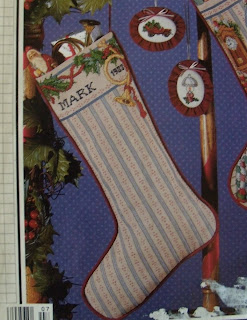 I've got my mushroom Lugana cloth sitting out in the sun trying to fade it a bit...I noticed the new piece I bought is darker than the cloth I used to make the other two.   It doesn't really matter but I'm giving it a try anyway.
I've overdue celebrating another blogiversary (they come around so fast!) so hope to plan a giveaway over the next few weeks.  Stay tuned to this space..and thanks for spending a few moments visiting me!  ﻿

Posted by Jeanne at 11:52 AM 31 comments:
Labels: Pride and Prejudice Sampler

I stitched this Lizzie-Kate freebie up this week and finished it into a tiny pillow.  My group of patriotic smalls is growing! 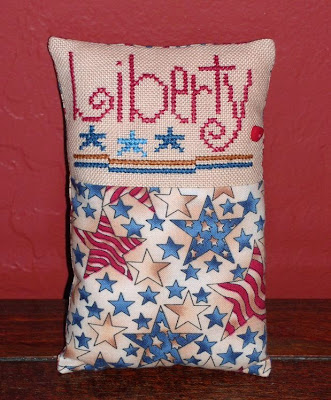 For all my USA readers I hope you have the day off and enjoy the holiday! 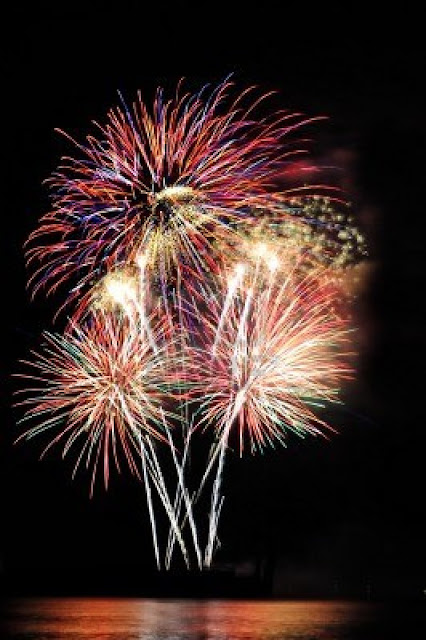 First, a big thanks to all those who left comments and stopped to visit. It's such a little bit of excitement when we see a new comment isn't it?? :)

A big TA DA! for me last week. I finally finished sewing down the binding on the edge of this king-sized quilt I've been working on the last couple of years. I'm so happy!! I fell in love with this quilt at a quilt show 3 or 4 years ago - Moda Fabrics reproduced the fabrics and pattern from an antique quilt from the 1800's. 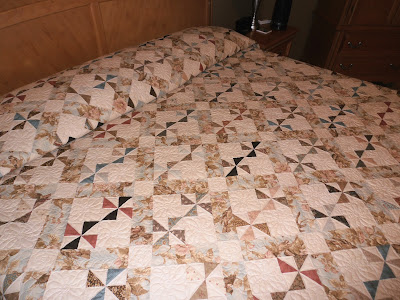 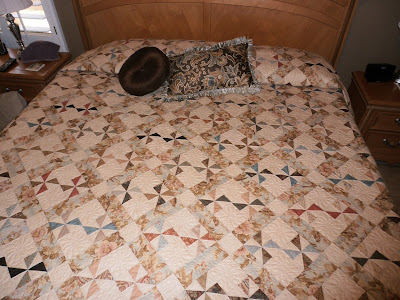 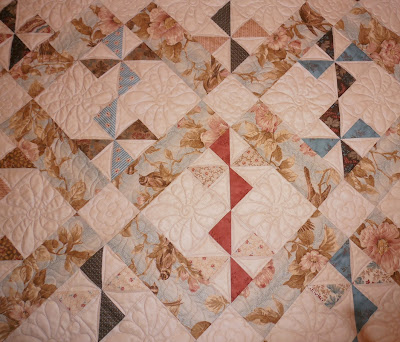 Close-up of the quilting 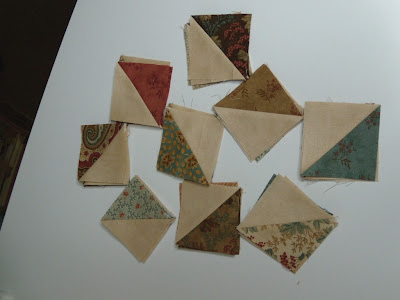 196 small pinwheels were sewn from the half-square triangles...and a lot more pressing and sorting was done...... 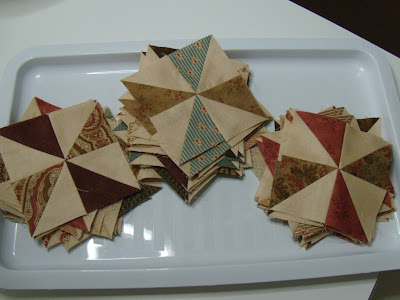 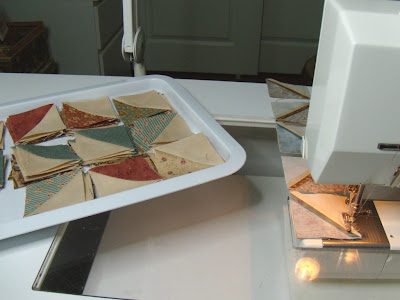 84 full sized and 28 half-sized blocks were made from the pinwheels and the background fabric. 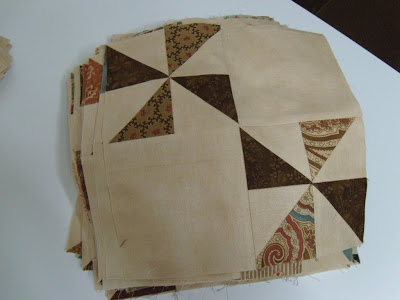 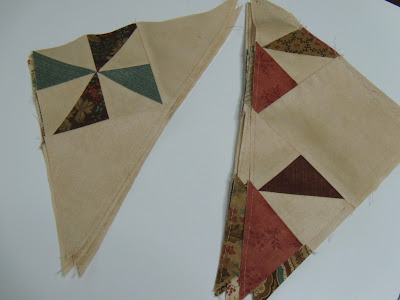 339 pieces of fabric were used to make all the sashing rows. 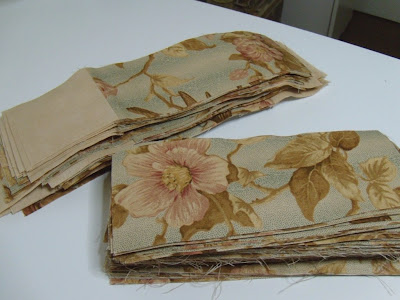 Not to mention all the rotary cutting, pinning, sewing, pressing, ripping out and re-sewing, plus laying the rows out for assembly so that the colors were spaced out evenly and everything was kept organized. I also used 10 yards of coordinating fabric to make the backing. 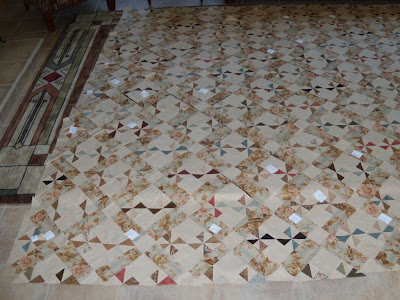 This was too big of a quilt (107" X 107") for me to quilt on my home sewing machine so I had it quilted by a professional quilter with a longarm machine. She does awesome work but there is always a waiting list so I had to wait about 4 months to get it back. Then I made the binding for the edges - it was tough wrestling this big quilt around to sew on the binding. 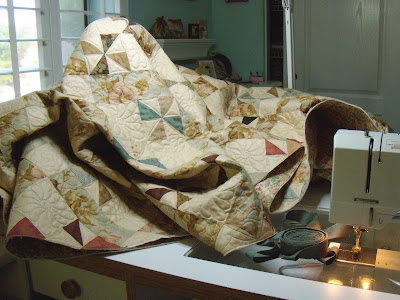 Whew! 2117 pieces in total but I think it was worth it. But this may be the last king-sized quilt I'll make LOL. (I'm not even going to mention the cost of all the materials and the quilting...that's another big number....) I made this quilt for our master bedroom but at this point I'm a little afraid to actually use it given that my 2 dogs do get up on the bed. King-sized quilts are a pain to wash and dry when they get dog hair and stuff all over them. This is pretty light-colored so I may just use it as a blanket during the winter months and keep the bedspread on top of it. I should make a label for it in case it ends up at a thrift store someday when I'm long gone. Horrors!!
Posted by Jeanne at 10:36 AM 16 comments:
Newer Posts Older Posts Home
Subscribe to: Posts (Atom)
Click here to email me. You must have a valid email address in your profile in order for me to respond.