Oh my I can't believe it's the end of February!  Where have the last two months gone to??  I feel badly about not updating my blog but thankfully I've only lost a a few of my followers.  Thanks for hanging in there with me dear readers!  I also am woefully behind in my blog reading...I'd like to mark everything as 'read' and start over but I might miss something important  - like some stash that I just MUST have you know

I'm dreadfully late in publicly thanking dear Joanie from over at Joanie's World...I won a big giveaway on her blog in November and I received a big box on Dec 24th! It was like a visit from Santa Claus!!  Joanie sent me 33 - yes 33!- patterns she had already stitched or didn't want anymore. I was totally awed!   A few of them I already had so I've set them aside to start a giveaway pile for sometime in March (stay tuned to this space)/

I've been fitting in stitching time whenever I can but life has been hectic.  I've been without a boss since the end of October and then my boss's boss also took another position so it's been crazy with lots of extra work and we're still waiting for new management to get announced.   I did do a New Year's day start although it's not gotten very far yet.  Here is Shakespeare's Peddler's "Jenny Bean's Humble Servant Sampler".  This is a piece that you don't really appreciate from the photo on the pattern but I was lucky enough to see a model a couple years ago at a shop. I love the colors and it's a fun stitch.  It calls for using 1 strand of overdyed cottons on 40-ct fabric.  I had trouble with not liking the coverage I was getting on motifs stitched in black so I substituted a silk for those - I'm picky about my coverage and hate when it looks skimpy! 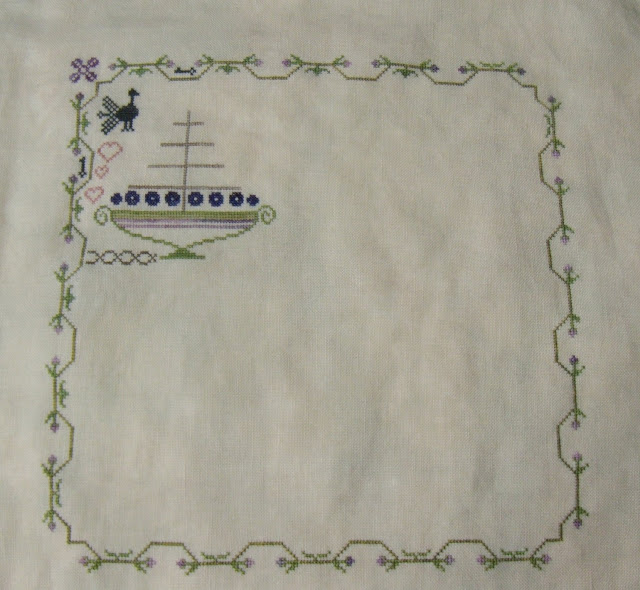 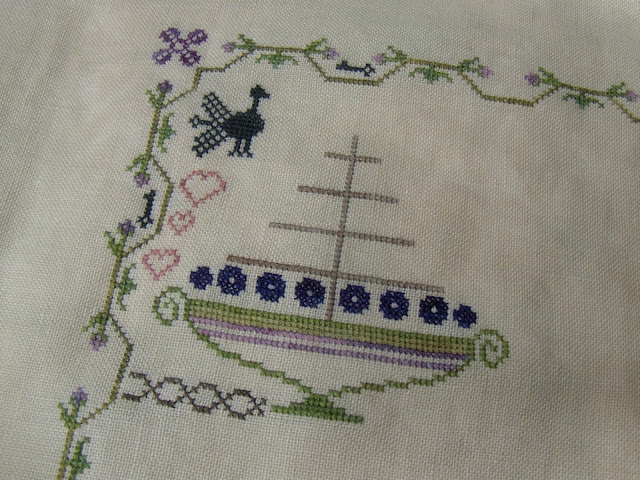 I also started a new embroidery project this month.  I blogged about this a few years ago.   My mom taught me to embroider when I was about 8 years old...I made a set of dishtowels with motifs of ducks doing housework. Those types of motifs were popular in the 50's and 60's - puppies, lambs, ducks, dancing dishes and silverware, etc.   My mom bought the transfers through an ad in the newspaper. They were supposed to be for my 'hope chest' but I married late so I used them and abused them when I was single  and got rid of them after they wore out.  About 4 years ago I ran across some vintage embroidery transfers on eBay and decided to see if I could find the duckies from my childhood.  It took me more than 3 years watching eBay and not finding them - they weren't one of the big brands so hard to find.  One day I logged on and there they were!  People are reprinting the old patterns because they're out of copyright now.  So I bought them and I'm recreating my duck towels almost 50 years later!  It feels good.  I can still remember my mom telling me to take small and neat stitches :-)   I think I've improved Mom! 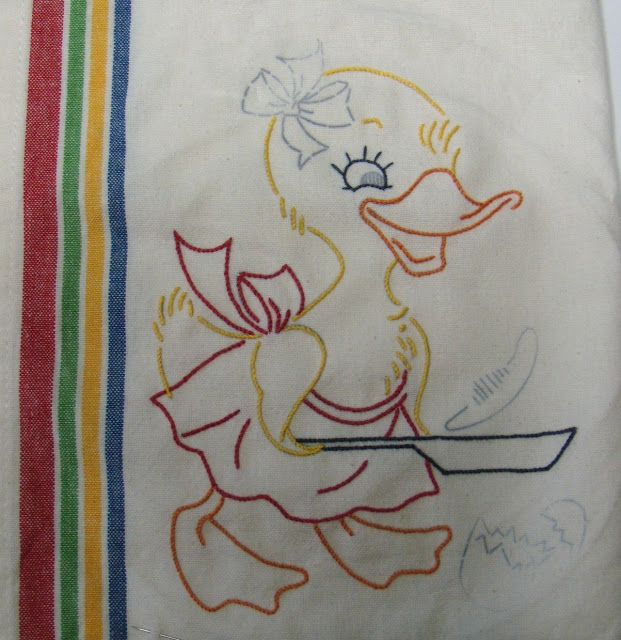 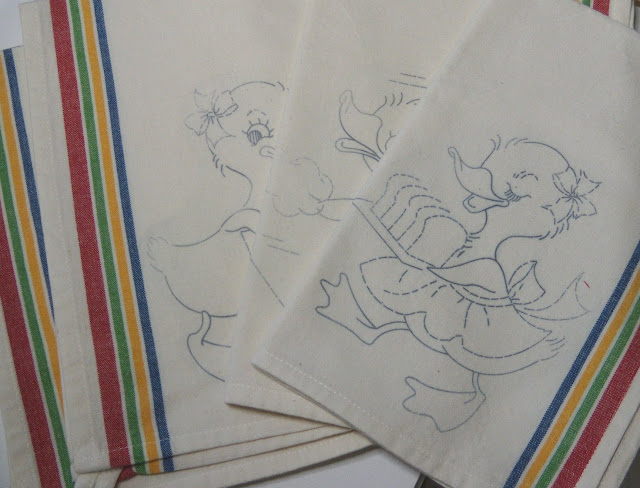 And speaking of old things.....at Christmastime I noticed how dated a couple of my old cross-stitch ornaments looked.  I made these in the late 80's before I was married.  They were mounted on these little sticky ornaments pads they used to sell and I had put country ruffles on them (everything was mauve & blue in the 80's you know!) The backs were all yellowed and yet I still liked the little Santas.   Figuring I had nothing to lose I threw them in a bowl of water and let them soak.  When they got all soft and mushy I tore them apart.  Since they were stitched with DMC there was no issue with anything bleeding. I ironed and trimmed them and remade them into new ornaments. I think they look a lot better now. 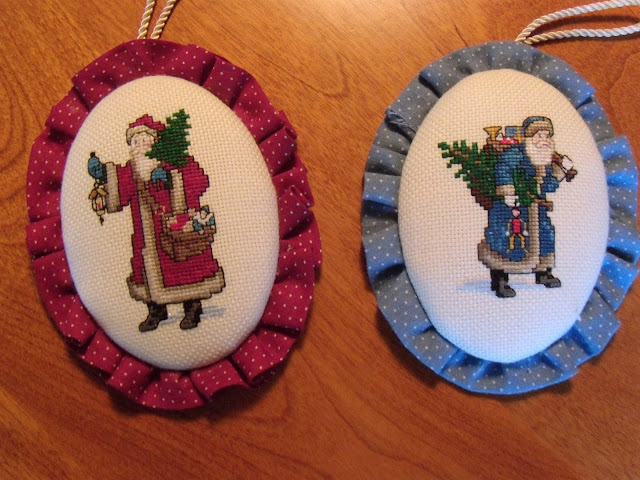 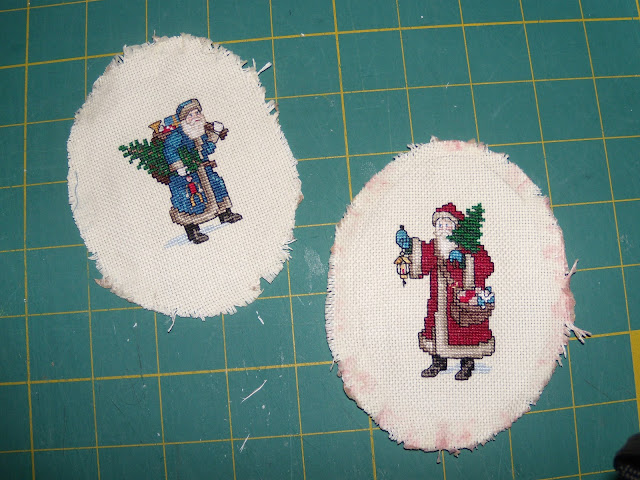 After tearing them apart.... 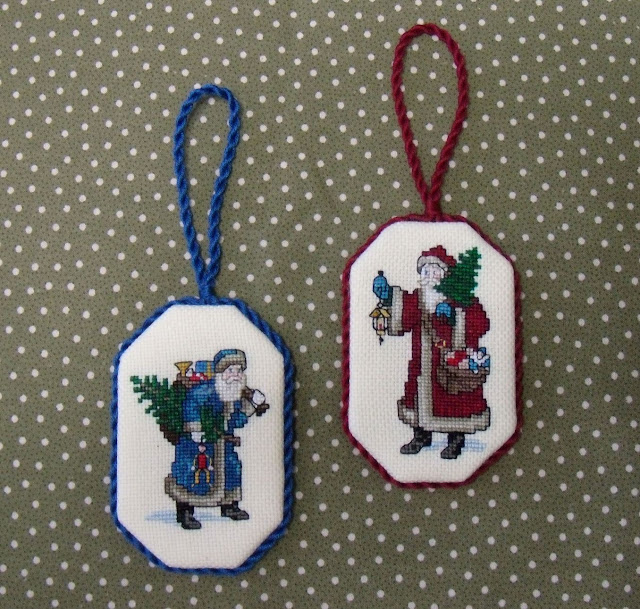 And I've been doing some finishing in the last 6 weeks too...some for myself and some for a friend.  I hope you enjoy looking at them.  I'm working on finishing up a display for my Gingher scissor collection and hope to share it in a few days.   I really need to be a better blogger! 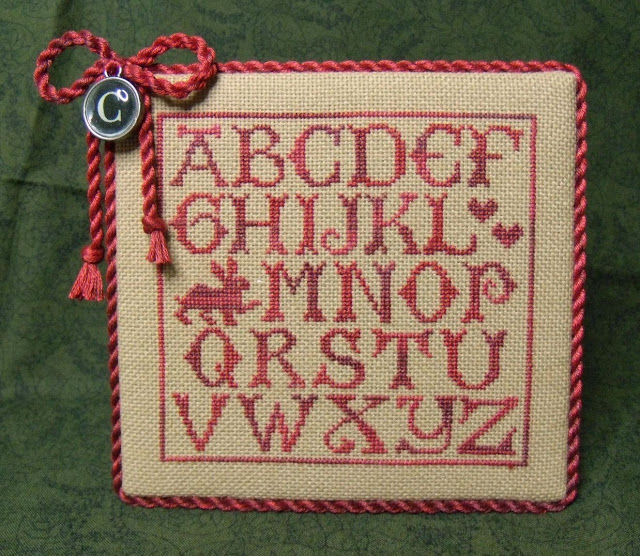 An alphabet freebie chart made into a flatfold 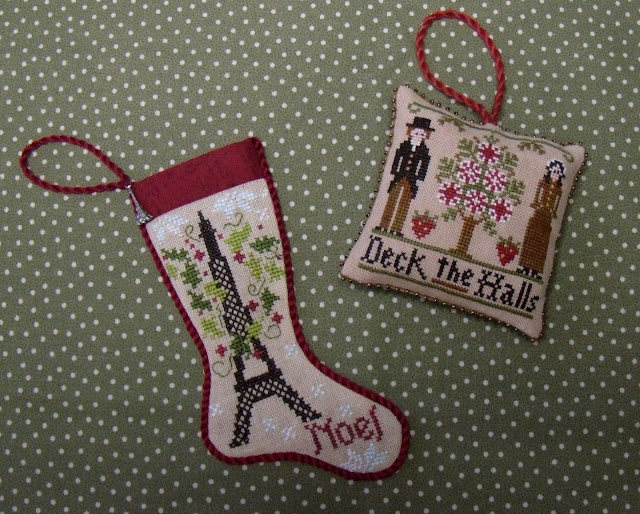 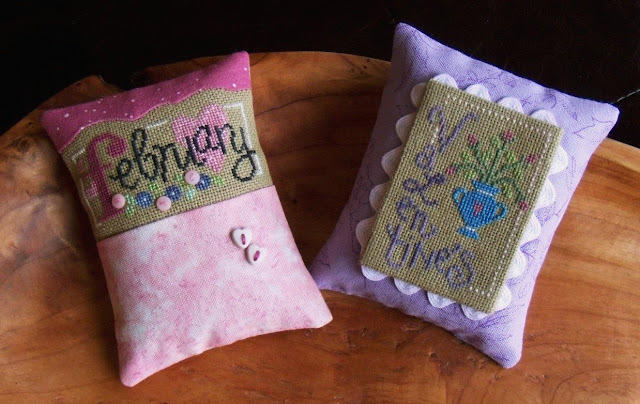 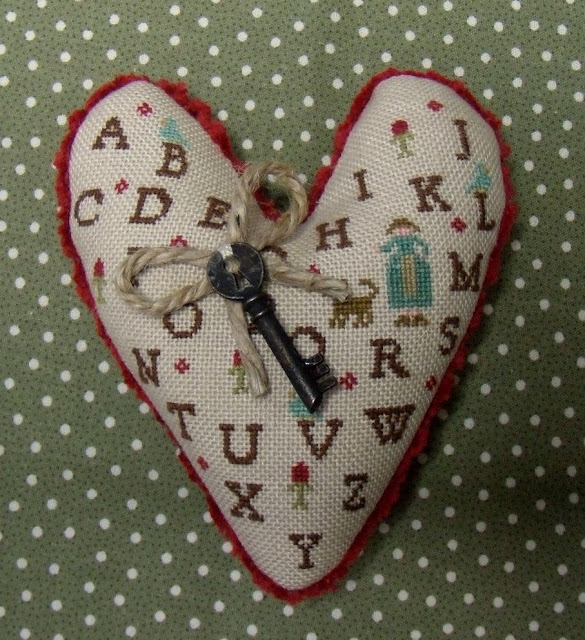 Love Letters by With Thy Needle & Thread
Posted by Jeanne at 9:59 PM 32 comments:
Newer Posts Older Posts Home
Subscribe to: Posts (Atom)
Click here to email me. You must have a valid email address in your profile in order for me to respond.