Got a few things to share with you before I'm off to Hawaii on Monday.   How is it that even going on vacation is sort of work....at least until you get there. There's shopping for clothes and things you need....laundry...packing.....getting the dogs ready to go to the dog resort....and a busy week at work getting things transitioned off to coworkers while I'm gone.  I'll be glad when those wheels lift off the runway!

I was able to complete 2 little finishes last week.   This is from the 2012 Year of Smalls group and it's the January project - Little House Needleworks "Poinsettia House".   I started it in mid-March as I only joined the group about mid-January and so started out right away with the February project.   This seemed to be quite a lot of stitching - that house particularly!   It was my "Celebrity Apprentice" project that I would work on Sunday nights while DH and watched the show.  (We love to diss the celebrities LOL.   Some of them seem to be real wackos!)   I changed the words from "Poinsettia House" to "Tis the Season" and added a few beads.  I guess it'll sit in the framing pile for awhile now....I've been spending a lot on framing and quilting lately so taking a break for a few months. 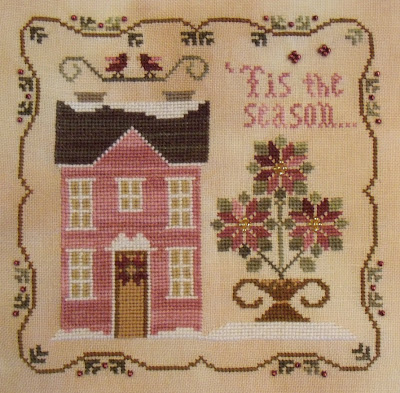 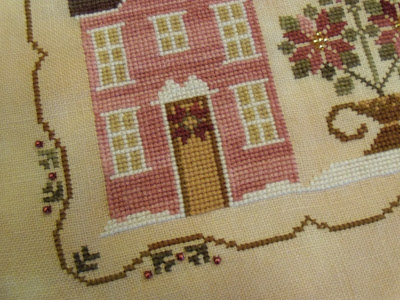 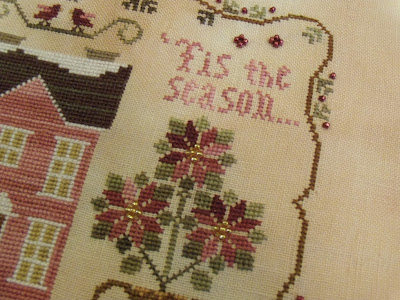 Little House Needleworks "Poinsettia House"
stitched on 36-ct LL Vintage Examplar with Crescent Colours
I've been so busy this month I was getting bummed about not getting an ornament stitched....on Tuesday I started a LHN one and it was such a quick stitch I finished it on Weds evening. So glad!  Now I can keep to my one-a-month schedule.    I plan on stitching the companion piece (Happy Skater from the 2012 JCS issue) to go with it and then I'll finish them both into ornaments.  This was just a totally fun stitch! 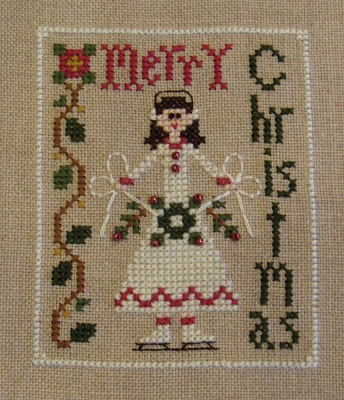 Little House Needleworks "Merry Skater" - 2010 Ornament Series
stitched on 32-ct R&R 18th Century Stone with DMC
I did get my little BBD piece finished into a pincushion....I have a lovely piece of plum colored wool on the back and it's filled with crushed walnut shells. It's now sitting with all the rest of my pincushions. 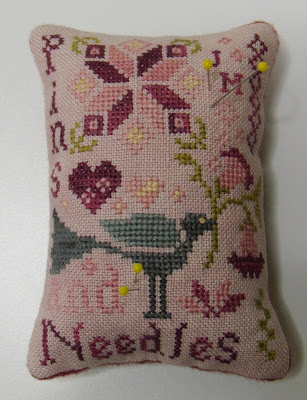 And speaking of framing...this is partly why I need to take a break.  I picked up another framed piece below last Saturday from the LNS.     It's been patiently waiting its turn for about 3-4 years now.   This was a round robin project that was done with a small online group I was in for a few years.  We aren't together anymore and sadly one of our members passed away a couple of years ago.  I don't know what most of the others are doing but assume they are still stitching.  Many of you may read Roberta's blog, she was also in our group and stitched on this piece.  She's only other member I know of that is currently blogging.    I don't  have hardly any blue in my house but once we tried this frame it was perfect for the piece so I went with it.  I'll hang it in one of my hallways once I figure out a place -  it will remind me of some fun times stitching in our little group.   When we stitched this piece we stitched all the squares to be in the same direction - the original pattern has every other row facing a different direction but I planned on hanging my piece and wanted them all facing 'up'. 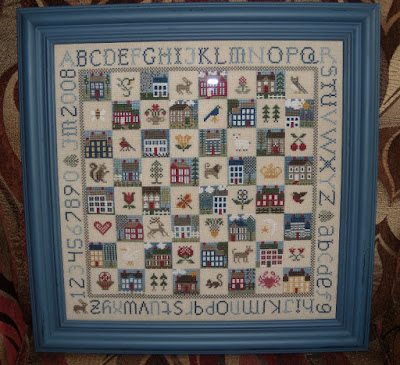 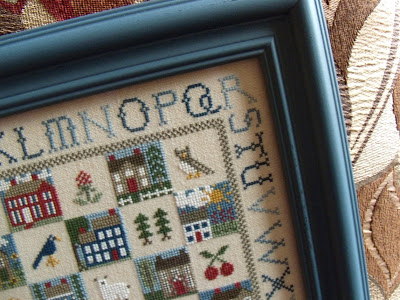 "Sampler Gameboard" by The Drawn Thread
Stitched on 32-ct lambswool with DMC
That's all for me for a bit....I'm not taking any stitching with me on my trip. I downloaded a couple movies and some books to my Kindle and will spend some time doing that instead. I don't like stitching on planes anymore because I have to wear readers on top of my regular glasses and it looks rather nerd-ish in public!
Posted by Jeanne at 4:26 PM 30 comments:

Now that I'm part of the WIPocolypse I see that moon starting to get full each month and feel like I better speed up my stitching!  The deadlines seem to come by faster every month.

I've been keeping busy of course.  Somehow I don't seem to get in those stitching slumps some of you do...I may not get as much done as a lot of people but I've lost not a bit of the desire to stitch every day as much as time permits.   I've held myself back from starting too many new things this year other than my monthly ornament I promised myself and the 2012 Year of Smalls projects.

I finished up stitching the March 'smalls' project - have all the materials laid out to make this into a pincushion which hopefully will get done this week.   I loved finally finding a project I could stitch on this pinkish linen!  I love almost anything pink  :). 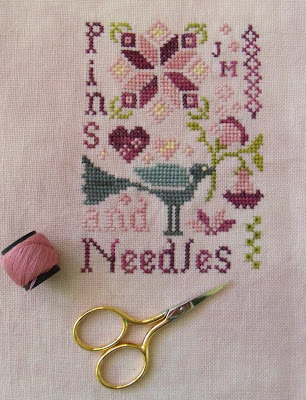 Blackbird Designs Reward of Merit - "Pins & Needles"
stitched with overdyed cottons on LL "Vintage Bittersweet"
Then I finally got around to finishing up this little patriotic piece....last year when the 10th anniversary of 9-11 happened I felt guilty this had been in my stash almost 10 years and not been stitched!!  It is a BBD pattern that I added the commemorative date to as I saw a similar model in my LNS.   I'm debating whether to frame it or make it into a hanging pinkeep-style finish. It's small - only about 8" by 3" because I stitched it on 40-ct.  This wasn't my most favorite piece to stitch...I was having issues seeing it on the top half...and I was bored with it.  Once I reached about 60% done though I got a second wind like a sprinter heading for the finish line  - I picked up speed and got the rest done in 3 evenings! (okay..no laughing...that's fast for me!) 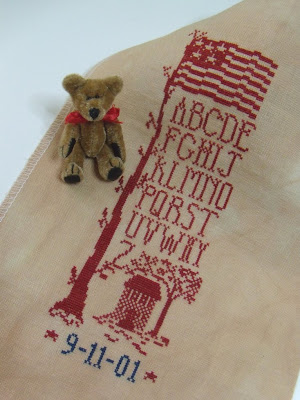 Blackbird Designs "Home of the Brave"
stitched on 40-ct something with Gloriana silks
Last but not least, I am making continued progress with American Sampler .I thought I would first show you a photo where I left off about 3 years ago, before I picked it up this past January to work on for the 2012 WIPocolypse. 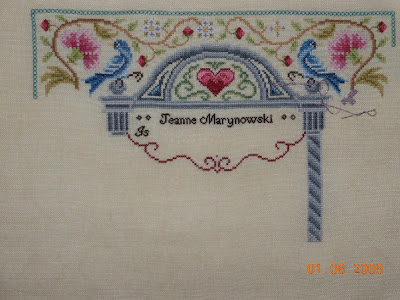 Here's how it looks today. I love the house which is one of the features that really attracted me to this sampler.  Who wouldn't want to live in such a pretty house??   It had a lot of over-1 stitching though for all the doors and windows.  I'm almost down to the flower vase on the right border which will be exciting.  My queen stitching is picking up speed a bit now that I'm regularly working on this piece.  There will be a miniature "George & Martha" on the grass by the house soon...at least that's what I'm calling the couple since they resemble George & Martha Washington and this is after all the "American Sampler".  Sorry these are all colored slightly differently - so hard to get accurate photos of how it looks! 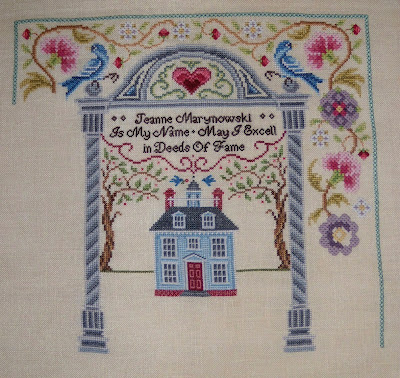 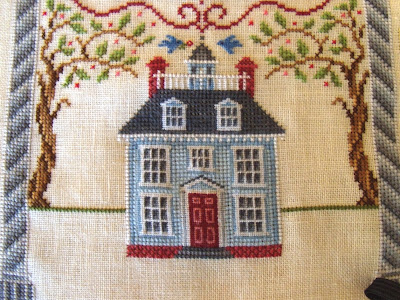 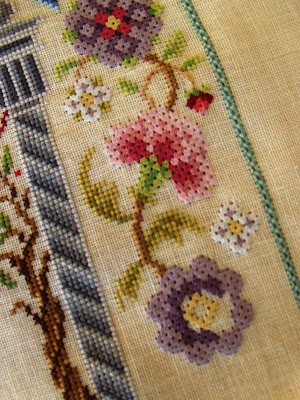 I'm getting ready to go on vacation in about 10 days...lots to do getting ready and I haven't even started my April ornament or April smalls project.  I'm falling behind but they'll keep.     Last night I bought a new toy .....a Kindle Fire.  So far I just love it!    We have so many gadgets at our house already...multiple networked computers and laptops, then we have our work laptops because we work at home most of the time, various iPods, smart phones and my husband's iPad.  He was wanting me to get an iPad also but I wanted something smaller I could carry in my purse.    Maybe I'll actually be able to fit in some reading now...I've downloaded some free classics so far but need to go out and do some browsing for some good books to read.   What is also a great feature is being able to load my stitching lists - I'm an obsessed list-maker.  I keep an inventory of all my patterns, all my threads, linens, and 'wish list'.     Maybe having these with while shopping will stop me from buying duplicate patterns!  I've done that way too many times.........
Last night was the season premiere of Deadliest Catch Season 8.....I'm a big fan having watched it for many years.....so I was parked in front of the big screen TV stitching on LHN Poinsettia House and glad my show is back.   Life is good!
Posted by Jeanne at 2:37 PM 29 comments:
Newer Posts Older Posts Home
Subscribe to: Posts (Atom)

Jeanne
I've been stitching for almost 40 years. I still love it and also quilt and do embroidery. I retired in 2015 from decades in Data Processing.