Hello stitchers one and all - I'm excited to report I finished up Plymouth Sampler a few days ago. I'm doing the happy dance to be sure! I finally had time today during lunch to press it and get a decent photo. It was a lot of stitching as it's fairly "solid" but lots of fun especially once you get the houses done This was designed after the 9-11 terrorist attack by Brenda Keyes of The Sampler Company as a tribute to America. It is stitched on Vintage Meadow Rue 40-count linen by Lakeside - I purchased this lovely mottled piece of linen some years ago and glad I did. The linen the Lakeside ladies are dying these days is not nearly as mottled as it used to be - maybe because they are dying in bigger lots of linen? I don't know but even my LNS owner was commenting on the changes she's noticed (not that we don't still love Lakeside Linens!). It's charted for DMC floss but I stitched the conversion to Needlepoint Silks that my LNS provided some years back. 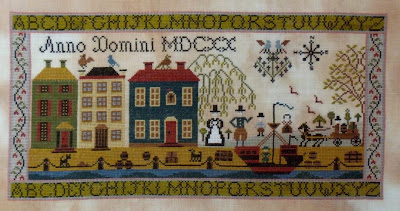 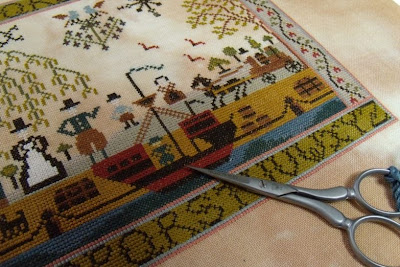 If anyone in the domestic U.S. would like the chart please mention it in a comment to this post and I will draw a name in a week or so and pass it on to someone else. It's "gently used" but still totally usable - I wrote the conversion on the chart and it does have a piece of scotch tape along the center where the chart (it's big) was folded in half - I was afraid it would get too worn there so I taped over the crease. It comes with all the accompanying extras included in the original pattern - a chart of alphabets, some history of samplers, etc.

I also finished a little self-framing project (patting myself on the back). This was another piece I pulled out of my "waiting to be framed" pile and decided I could do myself. Once I realized the piece was not as big as I remembered it, I had a brainstorm that it might fit into one of those pre-made frames for panoramic photos. I found this frame at a framing shop on sale for $8.99 - it was pretty ugly when I bought it (see before and after below) but I spray-painted it white, added a little Martha Stewart fine glitter, and it worked out great. This is a Shepherd's Bush piece that was stitched a few years ago in a round robin. Total cost of framing was $13 as I used my 50% off coupon at JoAnn's for the spray paint. :) 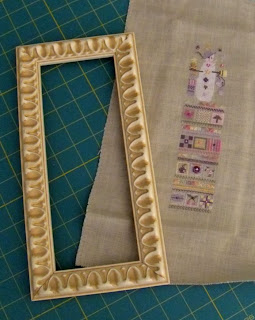 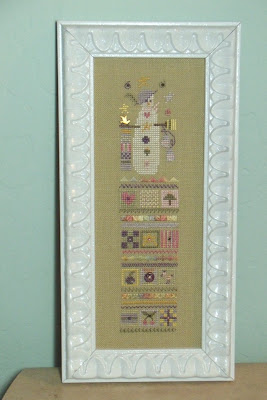 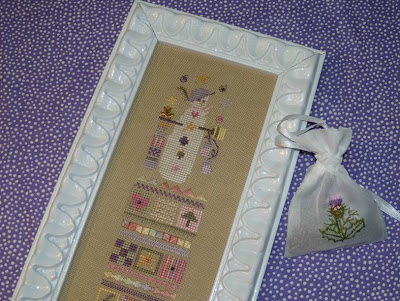 Now I'm concentrating on working on With My Needle by The Goode Huswife and Quakers & Quilts by Rosewood Manor. I was sort of stalled on both of them for a bit but now getting going again. It's hot here this week so I'll be taking a dip in the pool this evening and I want to catch that new show called "Boston Med" which looks interesting. Here's a photo of our dog Abby - we call her "Princess Bea" and you can see why. She's got a wonderful life let me tell you! 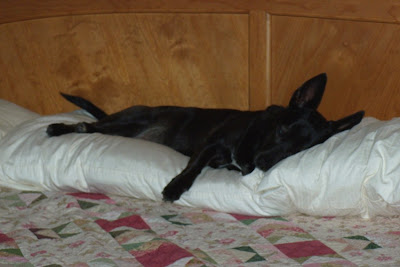 I hate summer colds! I had a lovely vacation back in the midwest but caught a cold on the way home unfortunately. I think it was the germs at the casino I visited in Minnesota - but I won $150 so I guess it was worth it! Husband and I flew into Minneapolis and rented a car - we put over 1000 miles on it traveling through 4 states visiting various family members in parts of Minnesota, Iowa, Wisconsin & Illinois. Aside from the rain and humidity which we're not used to much anymore, everything was nice. We really enjoyed taking a lot of the smaller highways around and relaxing in the peaceful farm country. I stopped at 3 quilt shops but didn't buy a whole lot - it's just fun to see different things.

I picked up my framed Peppermint Twist piece right before I left on vacation so here it is - they did a nice job with it. Now it's just wrapped up in tissue paper waiting to come out at holiday time. :) 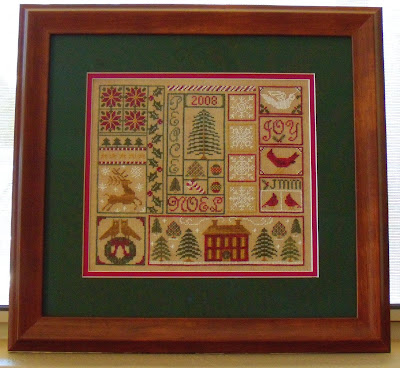 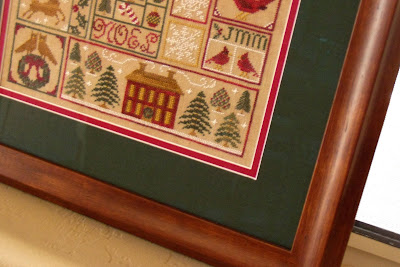 My adrenaline is going ......I am getting near the finish line with Plymouth Sampler - woohoo! I am about 90% done I'm guessing. I worked on it during the plane ride and when I could while husband was driving (some roads were too bumpy to do 40-ct stitching!) Luckily we got upgraded to first class both ways on our trip - oh it was so nice and spoiled me for next time! There is so much more room especially if you want to stitch. Here's a sneak peak at the pilgrims from Plymouth Sampler - hope to post a finish soon! 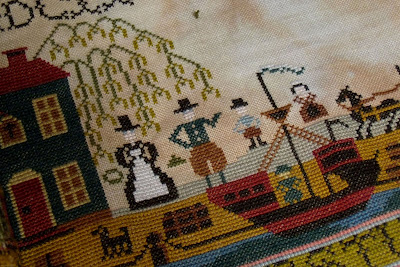 I must tell you a little story about the photo below. My mom taught me to embroider when I was about 8 or 9 - she got a pattern of ducks doing housework and we ironed the transfers onto those white flour-sack dish towels like people did back then. They were supposed to be for my "hope chest". I can remember sitting with Mom learning and her telling me to make my stitches smaller and neater. :) Well, I didn't get married young and the towels went with me when I moved out for a single life in Chicago after college. They got used and gradually thrown away when they got stained and old. For sentimental reasons, I cut out and saved the embroidery part from the last towel before I threw it out. You can see it here looking old and stained. For the last 4 years or so I looked online to see if I could find the patterns - searching vintage embroidery sites and eBay. No luck - my ducks seemed very obscure and weren't published by any of the major brands back then. A few weeks ago I was buying something on eBay and did my usual search for vintage embroidery duck patterns - up came my patterns! I almost fell off my chair. Since these old embroidery patterns are out of copyright now people are recreating the transfers and selling them again. I ordered the set of 6 for $5.99 and here they are! I am so thrilled - I've ordered myself a new set of towels and I plan to recreate my set. The seller says these patterns were sold out of newspapers which makes sense - I recall seeing those little ads in the back pages of our local newspaper when I was a kid - you could buy all sorts of crafting patterns for around 50 cents so my mom must have sent away for the transfers. Can you believe I found the same set of patterns after 46 years?!? I feel like I've come full circle! 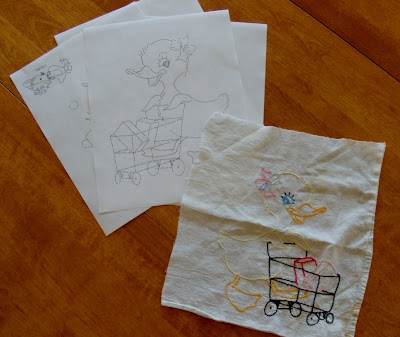 Posted by Jeanne at 7:37 AM 13 comments:
Newer Posts Older Posts Home
Subscribe to: Posts (Atom)
Click here to email me. You must have a valid email address in your profile in order for me to respond.