Happy St Patrick's day everyone! A friend of mine at work was wearing the cutest button today - "Roses are red. Violets are bluish. A leprechaun told me St. Patrick was Jewish!" My friend is Jewish and celebrates the more secular side of many of the Christian holidays so it's perfect for her.

Here's a few updates on what I've been up to. I finished my first house on my Pride & Prejudice neighborhood sampler – the Bennett sisters have a home! This house took a while to do and I could not go to bed on Sunday night until I finished it at 11:45 pm. You all know how that goes! You can see my finished "Longbourn" and a couple of the photos of the house used in the mini-series which I modeled from. I still have 2 of the sisters to stitch and then I will take a picture of the whole piece so far to share. I am just about finished reading the book - it's an easy read and I can tell that the mini-series from 1995 pretty much went right along with the book. The one thing I've learned though is that Lizzie (the main character) is spelled "Lizzy" in the book . Who would've thunk it? I already stitched in "Lizzie" in over-1 so now I'll have to fix it of course. 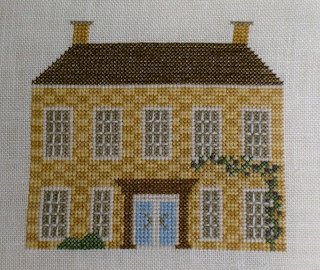 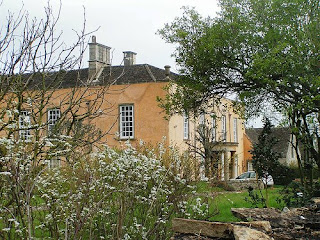 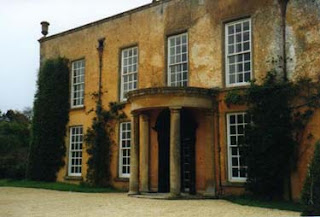 I cannot believe the month is half over already – I am so obsessed with my stitching lately that the days are flying by as I try to get my March goals done. At the beginning of every month I am wildly optimistic of how much I will get done but generally disappointed in myself by months’ end. I did finish up this little patriotic pillow on Friday. I stitched it one evening and finished it off the next night. It's very small - done over-1 and it was fun to get something done quickly for a change. I tried the matching buttons that came with the pillow but I wasn't wild about them so I replaced them with these flat red ones. I'm not a fan of shank buttons - don't like the way they stick out and wiggle around.

DH and I worked very hard this weekend in our backyard. The weather was absolutely beautiful and we replaced 5 plants, and spent many hours sealing all the flagstone surfaces we have. It took over $150 in sealer – ouch – but it is something that you need to do every few years. The sun here is so intense it really fades things and the sealer brought out some of the color again. However, I now look like I have some kind of awful skin disease. The label said “cleans up with soap and water” – NOT! I cannot get the stuff off of my hands even though I have washed them at least 70 times, scrubbed, rubbed, tried turpentine, tried nail polish remover and finally have given up. What was that Lady Macbeth said? "Out damned spot!" Remember putting Elmer’s glue on your hands as a kid and peeling it off? Well it looks like that but it just won’t come off. I guess it’s going to have to wear off gradually but right now my hands look like I’m about 80. As soon as this stuff comes off I’m off to get a much-needed manicure that’s for sure.

I think I was one of the few people who never have seen Phantom of the Opera – at least the modern version. So I put the Andrew Lloyd Webber version on my Netflix list and watched it Sunday night while stitching on the Bennett's house. Quite a disappointment I must say and apologies if it’s anyone’s favorite! I knew it was a musical but it is more like an opera with very little actual dialogue that is not sung. I just did not care for it but at least I can check that experience off my list and be thankful I didn’t pay a lot to go see the musical. Luckily DH was watching college basketball so at least I didn’t have to hear his complaints about the movie – he never would’ve lasted through it that’s for sure! March Madness is one of my least favorite times of the year because it's non-stop basketball on the television at my house. Normally DH goes to Las Vegas for the first weekend of the tournament but this year he is not going due to the darn economy. Luckily I will hide out in my sewing room as much as possible until the games are over – I’m just not into it at all. Gonzaga, Florida State, St John’s, Indiana, who cares?? I don’t understand being excited about college games when you never even went to any of the schools! And the worst thing is, as soon as it’s finally over then the NBA basketball playoffs begin and that leads right into the start of baseball season!
I’ve decided to make another new project start – it feels so deliciously decadent! I’ve got a bin of kitted up projects and some of them have been in there for YEARS. This is a sampler called Kona Coast by Ewe & I & Friends. It used to be a model in an LNS here that sadly closed up a few years back. I loved that little shop (sniff sniff) and they hosted an annual teaching getaway to Hawaii every year. Sadly, I never went to any of the retreats but I believe this sampler was designed especially for the year they had EEF teaching. I always wanted to stitch it and am finally going to get it started at least. I love houses and this is so cheery – beautiful tropical colors and special stitches although I probably will not stitch the wording on it. I need another start like a hole in the head but when has that ever mattered??

Finally - an ornament finish and some progress photos

I finally finished an ornament for this year! I'm way behind doing getting one done per month but at least I've got one now. This is a very old freebie I always had planned on stitching called "Santa in the Window". It's not available online. 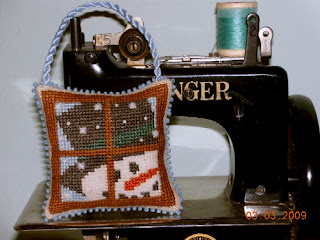 I've been making some good progress on other projects. Here is Beatrix Potter and Peppermint Twist progress as of today. I do wish I could get the color right in my photos but you'll just have to trust me the color looks better in person. Also, I took these pictures in the evening and that always makes it harder to get the color correct.

Hope all of you readers are doing alright. I've gotten to the point where I don't even want to listen to the news anymore - too many depressing things! Sometimes it's better to avoid it and just keep on doing the best you can. Luckily we did our taxes and are getting a refund so that's some good news for a change. We've had several restaurants and small businesses close down in our area. It's sad. In the meantime I'll keep trying to spend at my LNS because we need it to stay in business! I haven't picked up much new from market except a couple of the new Prairie Schoolers. I think I have more Prairie Schooler than any other designer - I counted them and I have 54! Don't ask me how many I've actually stitched - but you know if you don't get them when they come out then you have to pay even more to get them on eBay or something.
I had a question from a reader about how I end the trim around my flatfolds. I usually make my own cording - I start putting the trim on using the end where the cording was folded in half when I made it so that at least one end of my cording doesn't have raw thread ends. I glue the cording all around to within a few inches of where it meets the starting point. I mark where it needs to be cut with a pin and I put some Aleene's tacky glue around the cording where I think I'm going to cut it. I let it dry, then cut it the cording where I need to - the dried glue helps it keep from unraveling as soon as you cut it. Then I glue a little more on the end and twist it good with my fingers and glue the end in place so that it meets the starting point. Hope that's clear - just takes a little practice and sometimes it comes out better than other times. If you have trouble getting it to look nice, start applying your braid or cording in a corner of the piece and leave plenty of extra before you start glueing it down. Then when you get back around just tie the ends in a bow at that corner. You can then knot the ends and snip them. That's how I did this little pinkeep edge. 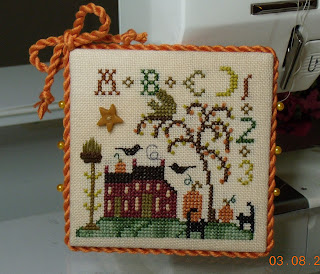 Posted by Jeanne at 7:14 PM 15 comments:
Labels: Beatrix Potter, Peppermint Twist
Newer Posts Older Posts Home
Subscribe to: Posts (Atom)
Click here to email me. You must have a valid email address in your profile in order for me to respond.