I'm off in the morning for a week roaming the Midwest as we visit both my hubby's family and mine.   Things have been hectic around the Willow Tree household, but I wanted to do a quick post before I left.

Since I wasn't with my mom on Mother's Day, we'll be celebrating when I see her next week.  Mom loves pansies and I found this free chart online that I stitched up for her and mounted in a box.    I added a little more fill in around the edges so that the entire area was filled with stitches.  I hope Mom likes it! 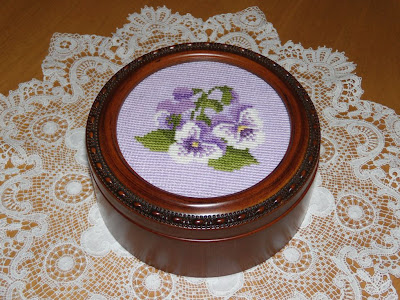 I also finished a little patriotic small - I've been inspired by so many great smalls I've seen on your blogs -  especially those darling baskets of themed smalls that Carol from Stitching Dreams does - I've started my own patriotic collection.   This is "Liberty House" from Ewe & Eye & Friends.  I found it on eBay after looking for a few months since it's out of print.  I changed the year and put 1776 instead of 2012 - it seemed more appropriate.    I've pulled several patriotic designs from my stash and will be working from that pile as I can. Maybe by the end of summer I'll have enough for a bowlful! 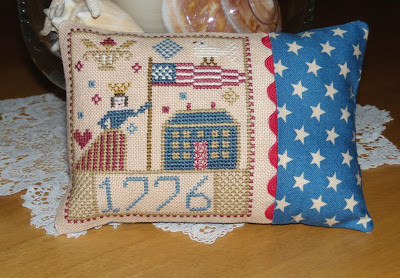 Thanks to tips from Cathy over at With Needle & Thread, I'm excited to be visiting Stitchville USA while on my trip. It's in the suburbs of Minneapolis and only 11 miles from where I'll be visiting for a couple days on our journey.  Lucky for me they're open on Sunday afternoons since that was really the only time I had available.  It's been a long time since I was able to visit a different stitching shop so I'm really looking forward to it - expect some stash photos when I get back!

Thanks for dropping by friends...can you believe it's June already and the year is almost HALF OVER?!
Posted by Jeanne at 11:11 PM 26 comments:

Finally - my May WIPocolypse update

Can't believe it's almost the middle of May already!  Seems like I've been stitching along but I don't have a whole lot to share.   I stitched a little more on American Sampler but not enough that I feel like taking new photos so I'll save an update on that for next month.   I've also been working on putting the binding on 2 quilts that I had quilted so I need to finish those up and get some photos taken. Those are 2 big things off of my WIP list!

We had an absolutely wonderful time in Maui....we didn't want to come home!   The weather was great and the resort was lovely.   We stayed in the same Wailea area where we had visited about 10 years ago, but at a different hotel this time.   Other than a bit of sunburn the first day (not enough sunscreen - note to self for next time!), and losing my prescription sunglasses in a big wave (next time put them on a cord!), all was great.  We ran into someone from the Dog the Bounty Hunter show in one of the hotel pools...not Dog himself but someone else on the show.   It was funny as we had been joking on the way about maybe seeing Dog.    Here's the views from our hotel room: 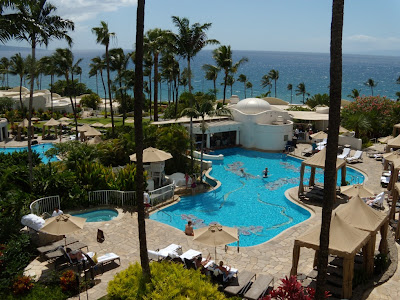 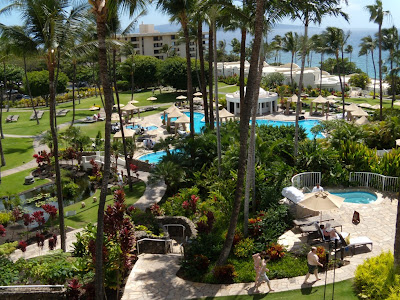 I did finish up the April selection for the 2012 Year of Small blog.  This is "Tisket a Tasket" from Little by Little Designs. I made it into a standing easel.  It was hard finding some fabric to go with the funky colors in this piece but luckily I had something in my stash that worked. 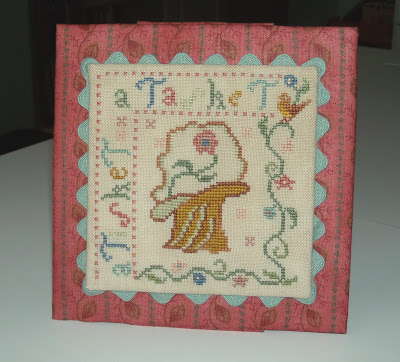 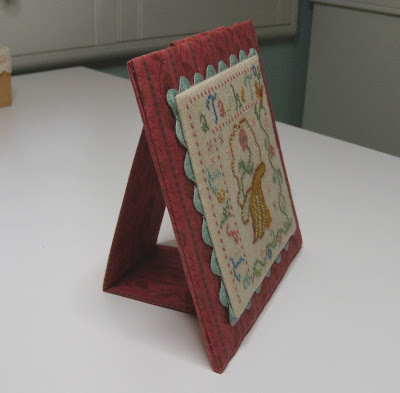 I also finished up my May ornament, the companion piece to Merry Skater from last month.  This is LHN's "Happy Skater" from the 2011 JCS ornament issue.    I need to do the finishing on both of these...I got some cording made for the hangers but that's as far as I've gotten.  I think I want to do a beaded edge on these ornies which means I need to order some more beads.  The LNS always seems to be out of red or green beads....grrrr. 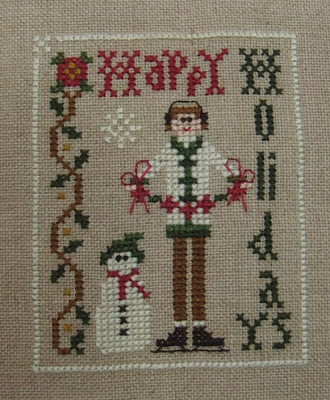 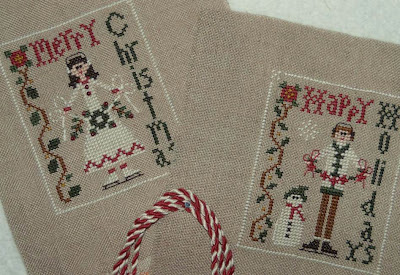 Last night I started on an old EEF piece....this is "Liberty House".  I've wanted this pattern awhile and when I saw Faye's finish on her blog last summer I had to find it.  I was able to get it off of eBay a few months later and it was kitted up even so I was thrilled.   My hope is to have a small basket of patriotic smalls sometime this summer so this will be the first.

It's supposed to hit 105 this week in Phoenix - ack!   I'm not mentally prepared for the heat yet...hopefully it won't last more than a day or two and then go back down a bit. 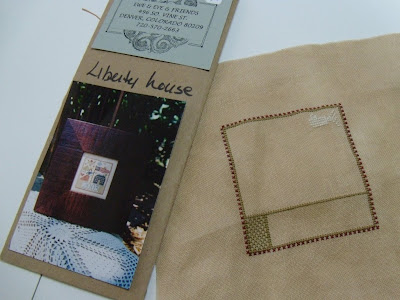 Posted by Jeanne at 12:48 PM 19 comments:
Newer Posts Older Posts Home
Subscribe to: Posts (Atom)
Click here to email me. You must have a valid email address in your profile in order for me to respond.