Come visit and see my framing!

Well last week really got away from me, I intended to post these earlier but just getting time to do it tonite. I am not the best photographer but I did the best I could....I have museum glass put on my 'major' pieces so it makes them harder to photograph. I'm so happy with how these turned out. My 'English Sampler' below was framed with a gold filet and a backing behind the piece so that the cutwork would show. The framer used a linen filler (not sure if that's the right word) but it surrounds the sampler and it has about an inch of 'depth' to it. The glass is only over the needlework part and not the surrounding areas. This is a big piece - it's 28" long and I had to wait 3 months to get it back but finally the bare spot in my little sampler grouping is filled! I do have lots of other stitched pieces around my house but I've been trying to make this group just samplers. 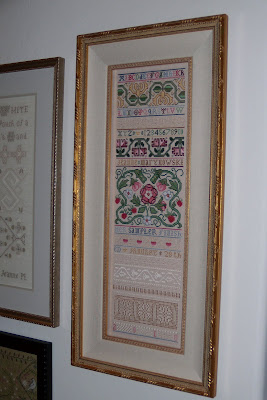 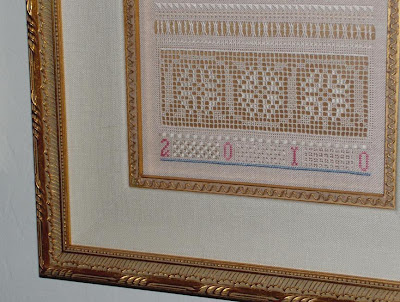 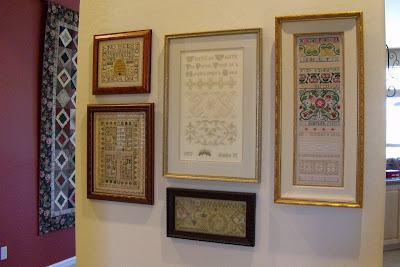 The other piece I picked up was 'Sampler Lady' by Little House Needleworks. For her I picked out a rustic style frame and she is now hanging in my sewing/stitching room. I still love this design and I've started on LHN's "My Needle's Work" as sort of a companion piece. 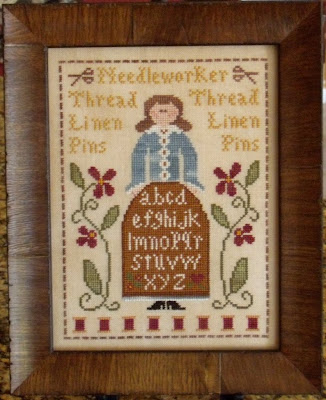 I've been stitching on all sorts of projects.....I finally felt like I had made enough progress to post another update on Quakers & Quilts. I think I've made it to the one-third milepost now. I started out doing the quilts along the bottom and they are a lot of stitching and back-stitching so I was kind of burnt out on this project and took a break from it for awhile. I'm finding the upper portion goes a lot faster thankfully! 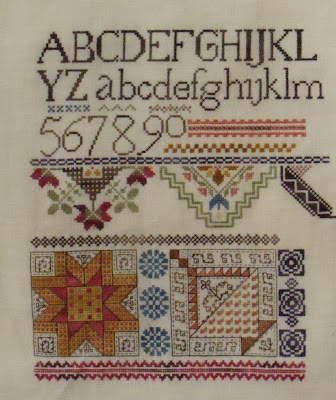 Are any of you "Deadliest Catch" fans? I was so sad when Captain Phil Harris had his stroke in January and died in February. It's been hard watching the show the last few episodes and seeing him pass away - it's like he died all over again. He was my favorite person on the show - you could tell he was pretty much the same guy on and off the camera. I think that's why people liked him so much - he told it like it is LOL. I work for a large international corporation where there are a lot of politics and a "process" for everything! My co-workers and I always say Phil never would've lasted a week putting up with the corporate world. Now when the next piece of corporate nonsense descends on us we laugh and say "What would Phil do?" The show just won't be the same without him next season. RIP Captain Phil!

Thank you so much for stopping by to visit. I truly enjoy each and every comment!

Edited: I almost forgot about posting the winner of the Plymouth Sampler chart. Out of the 8 people interested, husband pulled out #2 which was Jackie. I have emailed you Jackie and will send it out as soon as I get your snail-mail address. Thanks for visiting my blog!

I don't know why this little kit has been sitting in my stash for years but I finally got it out this week and stitched. It was a little freebie from Sunflower Samplings some years back and fits into a 2" X 3" frame! Not sure what to do with it, but it's done at least. 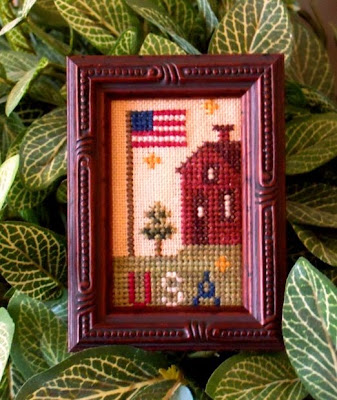 Today I'm picking up my long-awaited framing that is finally ready at my local needlework shop. Can't wait to see it and will post pictures next week.

Wishing a wonderful 4th of July to all my US readers. Usually we can see some fireworks from our backyard so hoping it's true again this year. It's too hot here to go anywhere and sit outside for hours!
Posted by Jeanne at 2:10 PM 20 comments:
Labels: Finishes
Newer Posts Older Posts Home
Subscribe to: Posts (Atom)
Click here to email me. You must have a valid email address in your profile in order for me to respond.