We have a giveaway winner!

I threw all the names in bowl and let the husband draw one out.....it's Anne from Doll's Musings - congratulations Anne!  I've sent you an email and will mail your winnings when I hear back from you with your mailing address.  Thanks to one and all for entering the contest, I'm only sorry everyone couldn't win.

Not a whole lot to share today, I'm still making progress on Halloween Rules, almost done with #3 of the 12 rules, they move along pretty quickly.  I like working on this project in the evenings while watching TV because it's on 32-ct and that's easier for me to see using regular lighting.   I usually work on projects that are on higher count linens in my sewing room/office where my big Daylight magnifier is.

I finished up some little bags this weekend. I saw this cute pattern in a quilt store and I just had to make some.  The pattern is called "Bridget's Bagettes".     The fronts are made out of clear vinyl which lets you see what is inside.  They were fun to do.  They're not very big you can see but I'm going to try to enlarge the pattern and make some stitching project bags this way.  You can never have too many project bags, right? 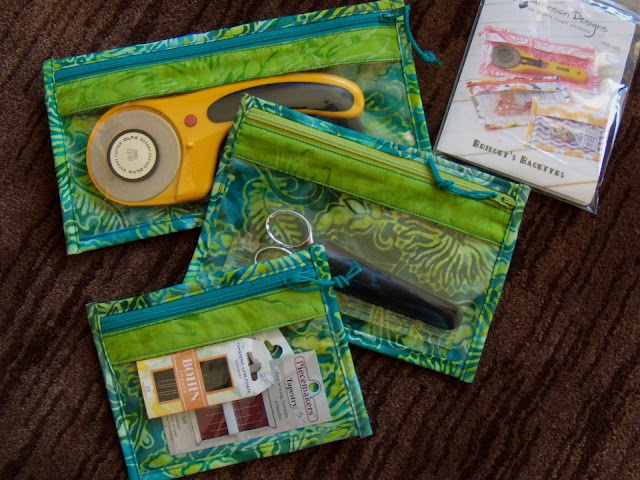 I'm happy I'm finally getting to go to a 'sew day' with my quilting buddies this Saturday. We have one each month but I've been too busy to go the last few months.  It's about the only time I get any concentrated time to work on my sewing projects.    We are so lucky...we meet in a community room at one of the local police stations...it's a huge room with lots of banquet tables and they let us meet there for free.    Perfect for spreading out with all your stuff, laying out quilts, etc.

No word on the job situation yet....everyone is still waiting to see who gets offered jobs and who ends up leaving.  Obviously, nobody feels like doing much work in the meantime although they keep dumping it on us.

I see I've gained some new followers - welcome and thanks for stopping by!  I hate that Google Reader is going away....I've been using Feedly on my iPad so guess I'll just stick with that but I hate always having to learn and use new things.   I don't know how to keep up anymore....Facebook, Twitter, Blogger, Tumblr, Pinterest, Instagram, Linked-In, Google+,  all the iPad and iPhone apps....I find it overwhelming sometimes.    I hope Blogger stays popular, I know some stitchers just post on Facebook but I've been resisting going to Facebook as I really don't have time to deal with yet another thing to check on.    Even though it takes time to keep up, I don't think I could cut myself off from the online stitching community, it would feel very lonely!  In fact, I can hardly remember back to the 'old days' before I was ever a member of a Yahoo group, bulletin board, or some sort of connection with other stitchers or quilters.  I appreciate sharing with all of you!
Posted by Jeanne at 9:35 AM 9 comments:

Back finally...and with a giveaway!

Well what can I say except I've been extremely busy the last couple of months with no time for blogging.  In the space of 8 weeks I had relatives in town 3 times, took 2 trips to Las Vegas and a trip back to visit family in the Midwest.    I won some money in Las Vegas (yahoooooo!), saw the Rolling Stones concert there at the MGM Grand, and came down with a bad cold and double ear-infection that turned into bronchitis for a few weeks.  Thankfully I'm almost back to my normal health now and things are starting to calm down.  I've also been going through a lot of stress at my job as we are in the middle of a big layoff.  About 240 of us had to post for 100 positions and I won't know for a few weeks what my situation will be.  I'm gone through sadness, anger, depression, and most all the emotions associated with that sort of thing, having been at the company over 17 years.    At this point I'm mostly in "acceptance"....fortunately I'm not desperate for this job at this point in my life so I'm not even sure I want to stay there if I'm offered my job back.  It may be time to move on with my life ...time will tell.

I did promise a giveaway back in March so I'm sorry it took me so long to get back to it.  I have a pile of miscellaneous stitching items....many patterns, some fabrics, a few small kits, a ring of about 45 silk fibers from Vicki Clayton, and I'll be throwing in a couple more surprises once I visit my LNS this week.   A few years ago I bought a bunch of Vicki Clayton's Hand Dyed Silks but I find I really never used more than a couple of them so hoping someone else can find them useful.   Some of the  patterns included are ones I've already stitched, or they were duplicates I had.    To enter the giveaway, just leave a comment on this post asking that your name be entered in the drawing.  If your email is not in your Blogger profile be sure to leave it in your post so I can contact you if you win.   Last day for entering is Monday June 10th. 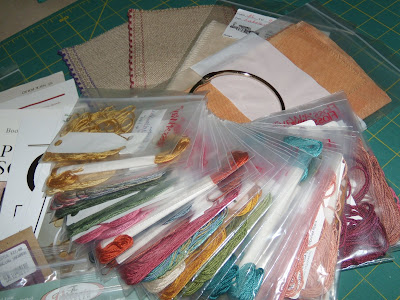 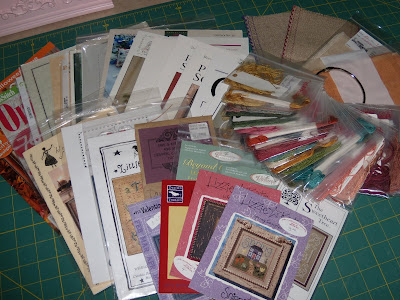 Even though I've been so busy I have been stitching as much as I could fit in.  I have a couple of finishes finally - ta da!  First up is Jenny Bean's Humble Servant Sample by Shakespeare's Peddler. I loved stitching this one, it was done on 40-ct Vintage Navy Bean fabric by Lakeside Linens with 1 thread of overdyed cottons over 2 thread of linen. 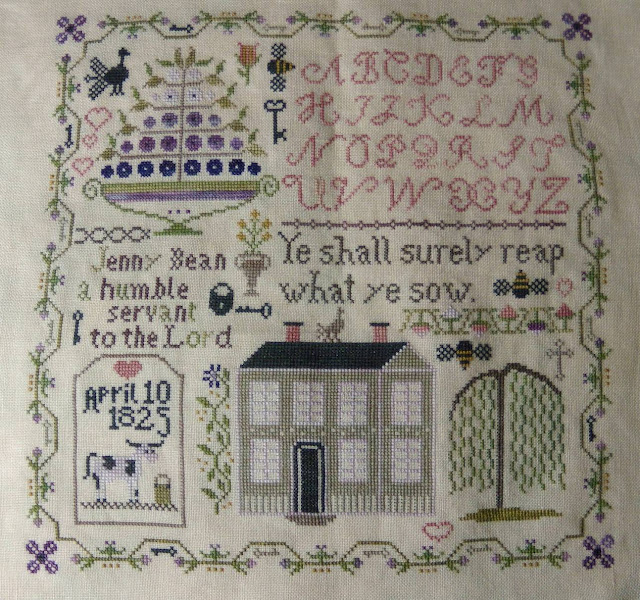 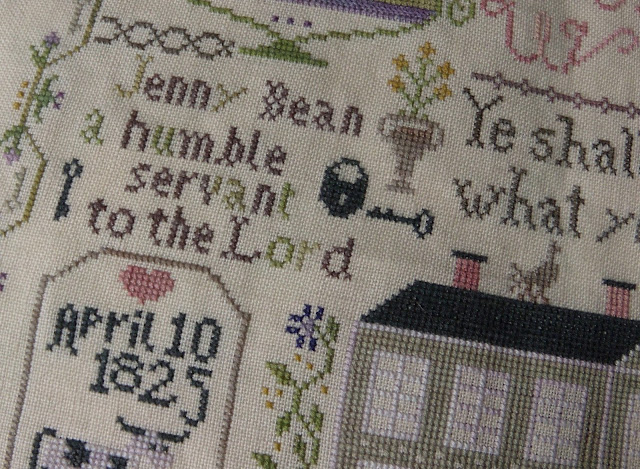 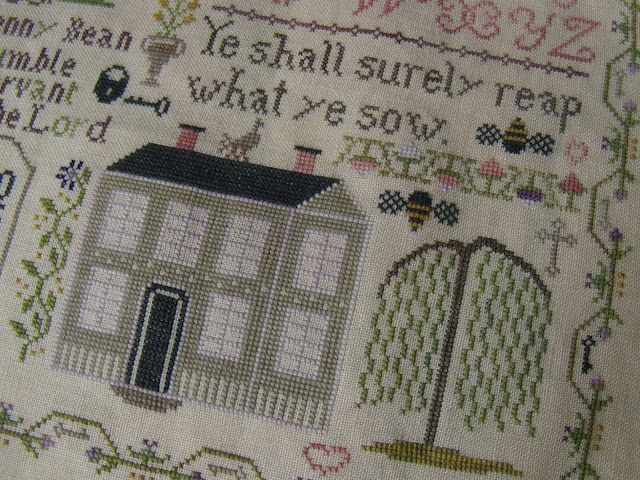 I found the little proverb on the piece especially meaningful to me as I was stitching it the week my department announced the big layoff.    "Ye Shall Reap What Ye Sow"....well corporate America  I hope you are listening.  When you don't want to employ your country's citizens and only want cheap offshore labor it may come back to haunt you someday.   Americans need jobs in order to buy your products.    It hurts to know that 120 of my colleagues will be losing their jobs.   I've been through 6 or 7 layoffs in my years at this company so they can outsource more jobs and I've just about had it.

I also finished Baby It's Cold Outside by Heartstring Samplery. 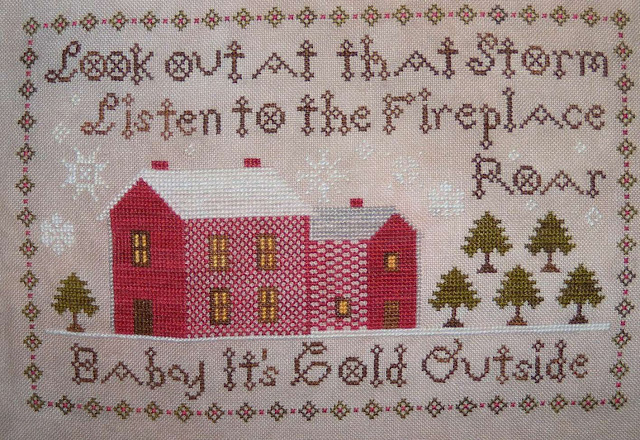 I loved seeing so many of you stitching this piece last winter and I did an SAL with my cyber-stitching friend Cindy.  We had fun and this was a pretty quick stitch overall. I used a red thread from Victorian Motto instead of what was called for in the pattern (GAST Pomegranate)  as the overdyed floss I had was a bit to pinkish for the house. I hope to drop this piece off for framing soon so I can enjoy it this winter.  It reminds me a lot of red farmhouses and barns in a Midwestern winter, which is where I grew up.   I do miss snow in the wintertime!

Once I got these 2 projects done I felt free to start up something new.  I have so much kitted up that it's hard to just pick one project  but I decided on Halloween Rules by Lizzie Kate.  I've been stitching on it about a week and a half and working on the second 'rule'.  I'm using a 32-ct mottled gray linen.  It's fun and a no-stress piece which is perfect for me right now. 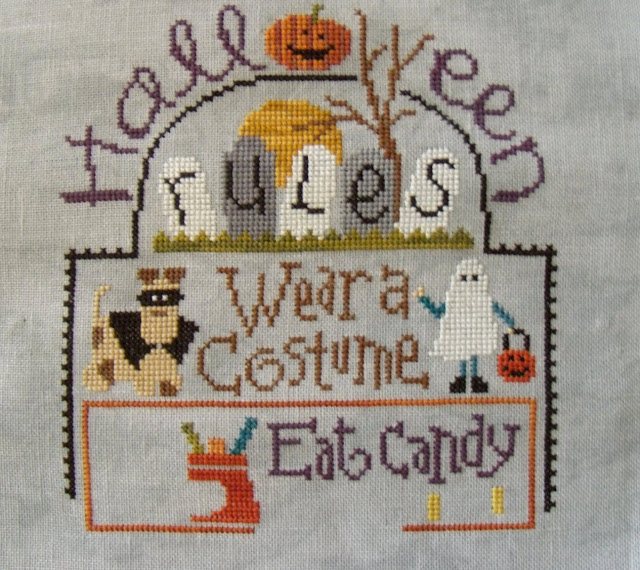 And of course I've continued adding to my stash.  After 20 years of visiting Las Vegas almost yearly I finally got around to visiting the cross-stitch shop Stitcher's Paradise.  It's not far off the Las Vegas Strip and well worth a visit if you're in town.  It's a small store but jam-packed with lots of goodies.    They have lots of great models all over the shop and beautiful cube finishes that were really inspiring. 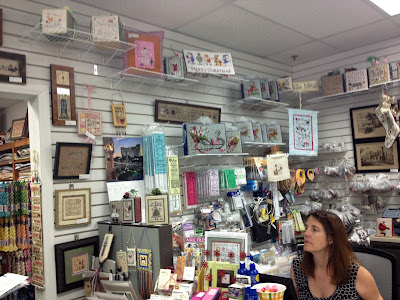 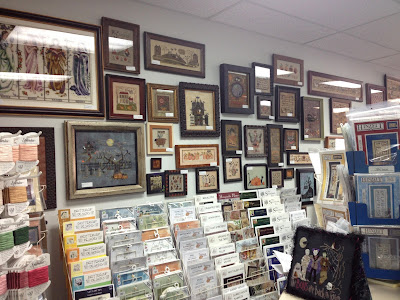 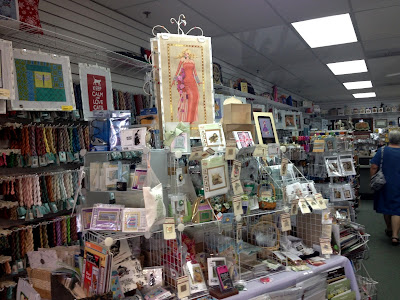 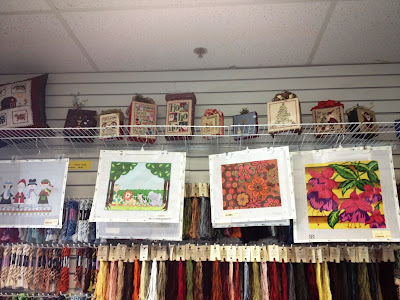 I also got to squeeze in a trip to the Country Cupboard stitching store in Orland Park Illinois when I was in the Chicago area. I'd been there a few years ago but enjoyed my repeat trip and I happened to get in on their 30th anniversary sale.  Having a shop celebrate 30 years in the needlework business is really something so I salute them!  I wanted to get to the Inspired Needle but could not fit it in this time. So I've been picking up patterns and fibers mostly.  I finally caved in and bought all of the CCN Santa's Village charts that are out - I told myself last year I wasn't going to be tempted but once I started seeing some of the great stitching on your blogs I was hooked!  I've been collecting the threads required and now just need to find some linen for this piece.....I'm thinking of doing it on 40-ct light blue linen if I can find something.   I also got some of the Sheep Virtues kits by LHN, and some other miscellaneous things I can't even recall right now.

Don't forget to enter the giveaway if you're interested!   Until next time.........
Posted by Jeanne at 9:06 AM 69 comments:
Newer Posts Older Posts Home
Subscribe to: Posts (Atom)
Click here to email me. You must have a valid email address in your profile in order for me to respond.