Well there went my 2016 blogging resolution but I'll try to catch up a bit here.  Life has been busy.  DH and I went up to Las Vegas for a weekend in January to see John Fogerty in concert at The Venetian Hotel/Casino. It was a terrific show and we really enjoyed it.  We're heading up there again in April to see George Strait in concert. I've always wanted to see him but never got around to it and I'm so glad he's come out of retirement to do some shows in Las Vegas.  Fortunately for us, it's only about a 4.5 hour drive so we enjoy going up there for weekend shows.

I didn't finish this in time for Christmas but got it done about a week later.  This is "Merry Christmas" by All Through The Night.  There's a model of this piece at my LNS done over-1 and I wanted to do it so I bought the little wooden pot they had theirs mounted on.   I thought it would be over-1 on maybe 32 count but when I went to get started I found out it had to be over-1 on FORTY count in order to fit on the little wooden pot.  It was torture to do it  and it gave me eye strain even with using my big magnified light but I persevered and finished it.  The chart only calls for the piece to be done in red but I opted to add a couple more colors.  I like how it turned out but NEVER AGAIN do I want to do that much over-1 on 40-count linen!   I put a quarter in one of the photos so you see how small it is. 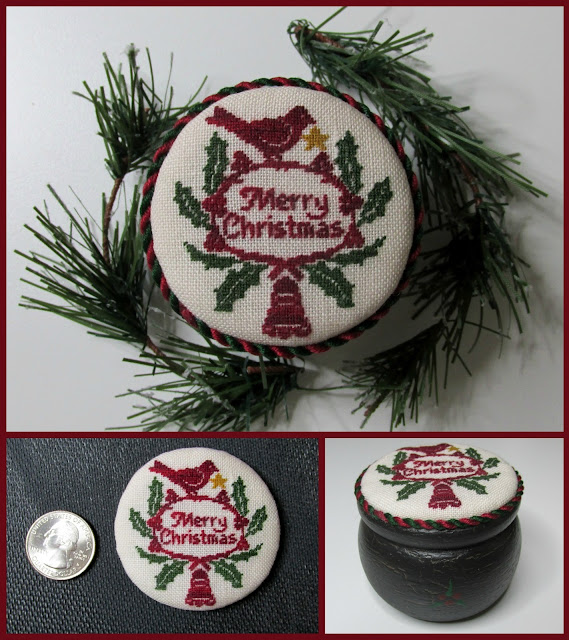 I finished some Lizzie Kate ornaments before Christmas too....these are all from Tiny Tidings 19. They were a lot of fun to do.   I love stitching ornaments!  You can see in the second photo below how many I have...when I was taking down all the Christmas decorations I was going to pack them all together so it was a good time to take a 'group photo'.   Some of them date back to the 80's even but I still have a whole lot more I want to stitch.
My current 2 focus pieces are Old Nantucket by LHN which I started about a year ago. The house took forever and once I got it done I was sort of burned out on this project so I put it away for some months.  I'm a bit further along than this photo....hoping to finish it up in the next week or two!  For years I always wanted to do a wall grouping of nautical-themed pieces but so far this is only my 2nd one.  I live in the desert southwest so yearn for the ocean! 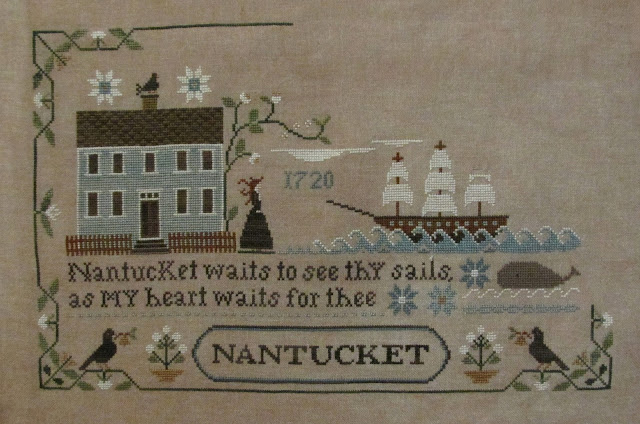 And this one is "Labor for Learning" by Plum Street Samplers. I joined a Facebook SAL for this piece and I'm enjoying this petite sampler.

I thought I'd show you a few of my oldest UFO's that I hope to get done this year although I haven't yet worked on them yet since the new year.   This piece below is ancient....dating back to the early 90's.  I packed it away for a long time as it reminded me of a difficult time in my life when I was stitching it.  But it's time to finally get this off my UFO list.   I hadn't planned on stitching the farm tools behind the beehive and flowers that is seen on the chart so I only need to finish up the flowers on the right side.   It's stitched on some odd linen I got on sale decades ago at an LNS - it was a square tablecloth that I cut up.  I just can't throw it out after all that work and so much backstitching 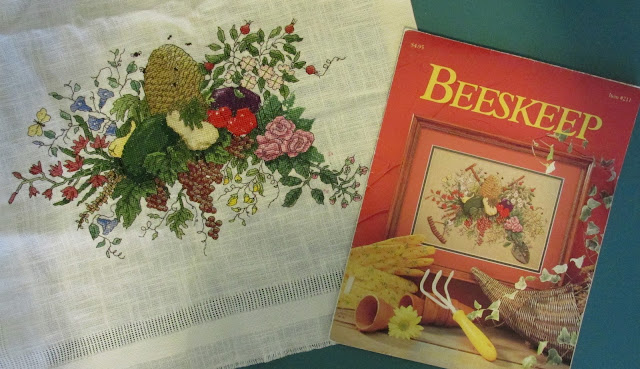 I don't remember how old this other UFO below is....probably at least 10 years or so.  It's "Fruit Bellpull" by Teresa Wentzler. I started it back in the days when I belonged to the TW bulletin board and I was enthralled with it.  Those of you who've stitched her pieces know how much work they are with all the confetti stitching and blended threads.  Just take a look at this - on the right are floss cards with all the colors called for and on the left are floss cards with all the blended threads from the colors on the right.  OMG...no wonder I never finished it!   I have 2 of the 6 blocks done and I'm thinking maybe I'll just stitch one or two more blocks and call it done.  I don't see myself ever getting 4 more of these blocks stitched.   This piece always makes me think of a girl named Laura Watkins who was very active on the TWBB back in its hey day....she was the leader of the Fruit Bellpull discussion group but unfortunately she died young although I never knew why.  She was a great stitcher and one of the first bloggers even though she was using her own website because it was pre-Blogger days.  She inspired many of us. 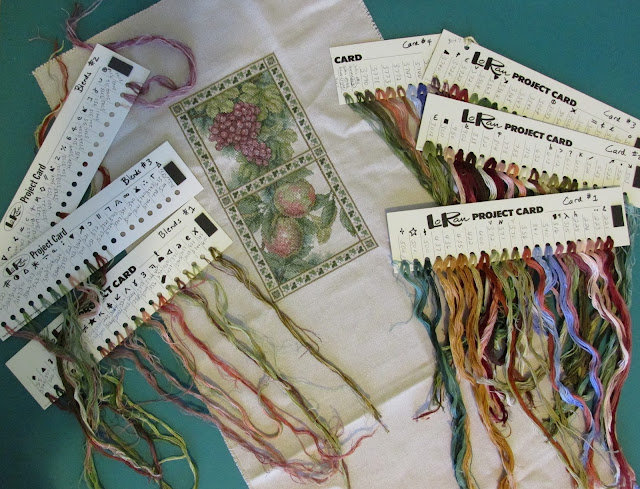 I also designated 2016 to be the year I get caught up on framing!  I'm tired of having a pile of unframed pieces lying around.   I recently got this piece framed - it was another FB SAL I participated in last fall.  I didn't get it framed in time for Thanksgiving last year but I'll enjoy putting it out this year.  I did the stretching and mounting myself and I think it came out pretty good.


My other framing piece I picked up is an old piece by BBD - Quaker Garden.  I had it framed years ago but I'd been unhappy with it for a long time because the frame I picked out originally is too dark and heavy for this piece.  So I finally got a new frame put on it and like it much better.  The new frame is sort of a pewter-like color and works well with the olive linen and floss colors.  Hoping some day I can reuse the old frame for something else.

'Before' photo with original frame choice: 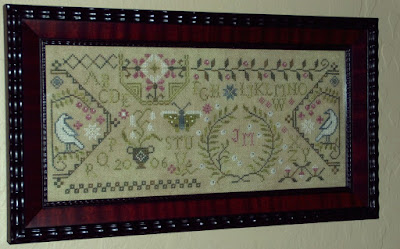 'After' photo with new frame: 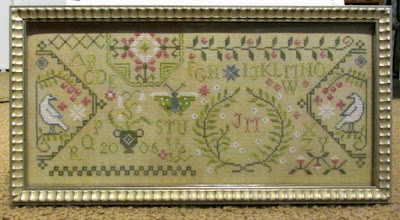 I've got 2 other pieces at my LNS now getting framed and I'm hoping to get a call soon that they're ready to pick up.  One of them is my CCN "Frosty Forest" and I can't wait to see it!

Thanks for dropping by....I know a lot of my former followers just aren't keeping up with blogs anymore so I really do appreciate any visitors who might still drop by!

Thank you for stopping by - I love hearing from other stitchers and crafters. If you have any questions be sure to leave an email address if you don't have one in your blogger profile so I can contact you. I appreciate your visit! (I've had to turn off allowing anonymous comments due to spammers)